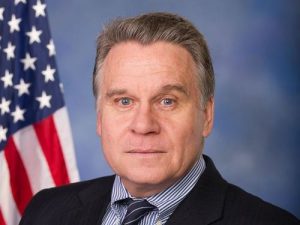 Washington, Sept. 14 (CNA) U.S. Republican Representative Chris Smith on Friday urged his country’s executive branch to fully implement the Taiwan Travel Act to bring about an increase in exchanges of high-level officials from Taiwan and the United States.

“Building on this, I urge you to fully implement the Taiwan Travel Act to allow regular and high-level exchanges between U.S. and Taiwanese officials,” Smith said to Pompeo in the letter.

Tsai made stopovers in two American cities, one in Los Angeles and the other in Houston, during her visits to Paraguay and Belize, two of Taiwan’s 17 diplomatic allies, in August.

Tsai’s U.S. stopovers were closely watched as they were the first since U.S. President Donald Trump signed the Taiwan Travel Act into law in March.

The Taiwan Travel Act encourages high-level U.S. officials to visit Taiwan and vice versa. It could lead to a change in previous U.S. practice that restricted bilateral visits by Cabinet-level ministers but allowed Taiwanese presidents to transit through U.S. cities en route to other countries.

Taiwan-based reporters traveling with the president were allowed to file stories at the scene, which was also a first.

Previously, only U.S.-based Taiwanese reporters could report on the president’s activities during a stopover, while those traveling with the president could only file their stories after leaving U.S. soil.

In addition to calling for the full implementation of the Taiwan Travel Act, Smith also urged the U.S. administration to “work diligently to ensure Taiwan’s participation in the United Nations and other international organizations.”

Smith said China has stepped up measures to diplomatically isolate Taiwan and intensify threats against the island, which has altered the status quo in the Indo-Pacific region.

“China has launched a multi-domain campaign against Taiwan that includes many aggressive and provocative actions, such as the dispatching of warships, bombers, and fighter jets, to encircle the island, as well as conducting live-fire military exercises near Taiwan’s waters,” Smith said.

“Furthermore, in the diplomatic space, China has worked assiduously to cut off Taiwan’s diplomatic partners and block Taiwan from participating in international organizations,” Smith added.

“China’s provocations are brazen and the U.S. must publicly protest China’s continued alteration of the status quo in the South China Sea and its multi-pronged effort to threaten and isolate Taiwan,” the congressman said.

Smith also urged the U.S. State Department to reaffirm the U.S.’s unwavering commitment to the Taiwan Relations Act and the Six Assurances since they form the foundation of U.S. relations with Taiwan.

“I applaud the administration’s commitment to building a free and open Indo-Pacific region. Supporting Taiwan is crucial in realizing this goal,” he said.