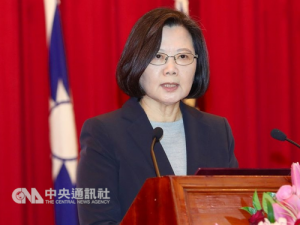 Taipei, Jan. 5 (CNA) President Tsai Ing-wen (蔡英文) on Saturday called on all political parties in Taiwan to reject the “one country, two systems” formula devised by China and forget about the “1992 consensus.”

In a press conference with foreign media in Taipei, Tsai said she hoped all the political parties in Taiwan would send a clear message to China, based on the wishes of the Taiwan people.

“Do not mention the ‘1992 consensus’ again since that phrase has been defined by China as the ‘one country, two systems’ mechanism, which has left no flexibility for interpretation,” Tsai said.

“By emphasizing ‘one China’ and ‘one country, two systems’, particularly in the context of the so-called ‘1992 consensus,’ China has made clear their political intentions towards Taiwan and their steps for unification,” she said.

Tsai said that as a democracy, Taiwan’s cross-strait interaction must follow the wishes and oversight of its people. “Therefore, any discussions must be between governments that are representative of the people of both sides,” Tsai told the 47 foreign correspondents from the United States, Japan, Europe and elsewhere, at the news conference at the Presidential Office.

On Wednesday, Chinese President Xi Jinping (習近平) said a speech commemorating the 40th anniversary of the “Message to Compatriots in Taiwan” that China must be reunified.

He said China is willing to talk with any party in Taiwan to push forward the political process as long as the party accepts the “one China principle.”

However, “we make no promise to renounce the use of force and reserve the option of taking all necessary means” to serve that end, while China continues to seek “peaceful reunification,” Xi said.

In his speech, he defined the “1992 consensus” as “the two sides of the strait belonging to one China, and working together to seek the unification of the nation” and said the one country, two systems formula is the best approach to achieving reunification.

The “1992 consensus” refers to a verbal agreement reached in 1992 between the then Kuomintang (KMT) government of Taiwan and Chinese communist officials. The agreement has been consistently interpreted by the KMT to mean that both sides of the Taiwan Strait acknowledge there is only “one China,” with each side free to interpret what “China” means.

However, Beijing has never publicly voiced support for the second part of the KMT interpretation.

Tsai said Xi has been trying to skirt the democratic process by calling for talks with individual political parties instead of with the Taiwan government, which is elected by the people of Taiwan.

“China’s plan to engage in political consultation with the political parties instead of the democratically elected government of Taiwan is a continuation of its deliberate campaign to undermine and subvert our democratic process and create division in our society,” Tsai said.

She called on the international community to stand with Taiwan in the face of the threats from China.

If the international community does not help and support Taiwan, she said, the country will become another victim of China’s pressure.

China should pay closer attention to issues that affect the lives of the Taiwan people, Tsai said, adding that for example, China should be working with Taiwan and other countries in the region to help combat African swine fever (ASF).

Authorities in Taiwan have deep concerns that the current outbreak of ASF in China could spread to Taiwan and Kinmen, which is only about 2 kilometers east of the mainland Chinese city of Xiamen.

Tsai also called for the World Organisation for Animal Health (OIE) to coordinate the efforts in the region to prevent the spread of ASF, saying Taiwan has good experience in disease prevention and is willing to make a contribution.