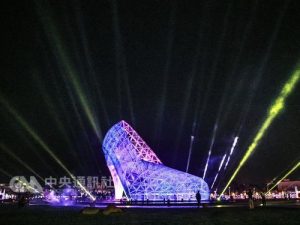 Taipei, Sept. 9 (CNA) The Tourism Bureau will launch a series of campaigns to boost travel interest in a “Cinderella Shoe” structure in Chiayi County, a once popular tourist attraction that has been losing its appeal.

The installation art piece, 17 meters tall and made from 320 panes of blue-tinted glass, is shaped like a high-heeled shoe and is sometimes booked as a wedding venue because people associate it with the Cinderella fairytale.

Soon after it was built in February 2016, it reportedly drew 200,000 visitors over the five-day Lunar New Year holiday that year.

Later in the year, the bureau’s Southwest Coast National Scenic Area Administration that built and now manages the installation artwork, applied for and eventually gained Guinness World Record certification for the artwork as the world’s largest high-heeled shoe shaped structure.

Recently, however, the number of visitors to the site has dropped sharply from an average 200,000 per month in spring to 140,000 in summer, according to the Tourism Bureau.

“It is very surprising to see that the structure has lost its appeal so fast,” Wu Chun-chieh (吳峻傑), an official at the bureau’s Southwest Coast National Scenic Area Administration, told CNA on Friday.

He said efforts to attract private operators have also been unsuccessful.

Even now, with the annual rent set at the rock bottom price of NT$1.7 million (US$56,650), there have been no tenders to operate the wedding venue and the 12 shopping booths, Wu said.

As a result, the southwest administration has come up with a plan to upgrade the facilities and services and launch a series of promotions in the hope that interest in the structure will be revived, he said.

The measures include an extension of a temporary projection mapping show to an year-round event, as well as an installation of air conditioning facility inside the building.

Meanwhile, Ocean Hotel, which is about a 15-minute walk from the structure, has not seen any significant drop in business as a result of the waning popularity of the Cinderella Shoe.

The three-star hotel, once a visitor service center, said it is more worried about slow business on weekdays.

According to the hotel, which will start formal operations in October after a 13-month trial run, it usually has full occupancy on weekends and public holidays, but is only about 30-50 percent full on weekdays.