Taiwan’s allies ask U.N. to recognize the country as a member 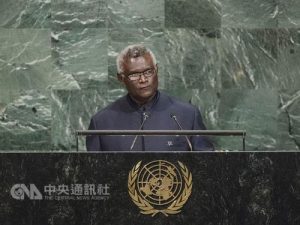 New York, Sept. 22 (CNA) Five more of Taiwan’s diplomatic allies spoke up for the country at the United Nations General Assembly on Friday, pushing for the international organization to recognize Taiwan as a member.

As the general debate of the U.N. General Assembly continues, leaders from five more of Taiwan’s diplomatic allies, namely Kiribati, Saint Lucia, Solomon Islands, St. Vincent & the Grenadines and Belize, took turns calling for Taiwan to be included as a member of the U.N. family.

Kiribati President Taneti Maamau said that if the U.N. family is incomplete, discussions regarding the promotion of human welfare cannot take place.

He pointed out that though the U.N. preaches inclusivity and unity at the general assembly each year, “we have chosen to ignore Taiwan’s 23 million people, depriving them of their right to be a part of this global family and to participate and contribute to the sustainable development goals (SDGs).”

On behalf of Kiribati, Maamau asked the U.N. to allow Taiwan to be a member of the U.N. family.

The fact that Taiwan’s 23 million people are being excluded was a recurring theme in the speeches of other leaders.

Solomon Islands’ Prime Minister Manasseh Sogavare called the U.N. out for contradicting its own principle of “leaving no one behind” in promoting the SDGs when the international organization has clearly let Taiwan’s people slip through the cracks.

Sogavare commented on Taiwan’s willingness and readiness to contribute to human welfare, saying that the attainment of the SDGs requires the participation of the whole world.

Like Maamau, he ended his speech on Taiwan on a strong note, asking the U.N. to acknowledge Taiwan as a member after having ignored the right of Taiwan to self-determination for so long.

Both Belize’s Foreign Minister Wilfred Elrington and Saint Lucia’s Prime Minister Allen Michael Chastanet commented on Taiwan’s continued efforts to support global development and the core principles and goals of the U.N, but as Elrington pointed out, Taiwan has been treated unfairly by the U.N.

This unfairness and disparity in what the U.N. has set out to do and how it handles the situation with Taiwan was further highlighted by Deputy Prime Minister and Foreign Minister Sir Louis Straker of St. Vincent & the Grenadines who said that it was an issue that needed to be corrected immediately.

As of Friday, 12 of Taiwan’s 16 allies who have taken the stage during the general debate have voiced their support for Taiwan’s participation in the U.N. whether as a member or in an alternative capacity.

The Republic of China (Taiwan) previously held a seat at the U.N. until 1971 when it withdrew before the organization could vote to admit China and expel Taiwan.