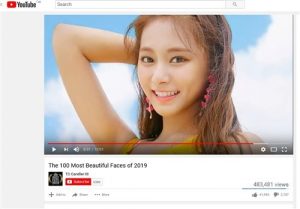 Also known simply as Tzuyu, the 20-year old Tainan-native was the only Taiwanese who made it onto this year’s list, which has been presented annually since 1990.

This year, Israeli model Yael Shelbia was No. 2 on the list, followed by Thai singer and model Lalisa Manoban, French model Thylane Blondeau, and English actress Naomi Scott, who is best known for starring in Disney’s musical fantasy film Aladdin in 2019.

On its YouTube page, TC Candler said almost 40 countries are represented on the annual list, and that the “number seems to go up every year as public participation grows and expands.”

The annual list, it said, takes into account millions of suggestions submitted by the public over the past couple of decades, and tries to put together “a list representative of the modern ideal of beauty,” taking into consideration criteria including aesthetic perfection, grace, elegance, class, poise, joy, promise and hope.