Taiwan will do whatever it takes to defend itself: President Tsai 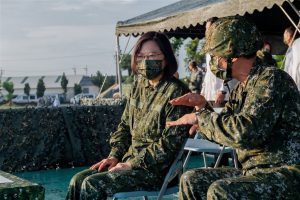 Taipei, Oct. 5 (CNA) President Tsai Ing-wen has emphasized that Taiwan will do whatever it takes to defend itself if its democracy is threatened, alluding to recent actions taken by China, in an article published Tuesday in the U.S. international relations outlet Foreign Affairs.

In the article, President Tsai pointed out that Beijing has never abandoned its ambitions toward Taiwan, as exemplified by its years of double-digit investment in its military and expansionist behaviors across the Taiwan Strait and in the surrounding maritime area.

Despite this, Tsai stressed the people of Taiwan have made it clear that democracy is non-negotiable. “Taiwan will not bend to pressure, but nor will it turn adventurist, even when it accumulated support from the international community.”

To ensure stability, Tsai said, Taiwan will continue to express its openness to dialogue with Beijing, as well as being fully committed to working with other regional actors as Taiwan lies along the first island chain, which, if “broken by force,” would disrupt international trade and destabilize the entire western Pacific.

“A failure to defend Taiwan would not only be catastrophic for the Taiwanese; it would overturn a security architecture that has allowed for peace and extraordinary economic development in the region for seven decades,” Tsai said.

While the COVID-19 pandemic has made authoritarianism more convinced than ever that their model of governance is better adapted than democracy, Tsai said, Taiwan’s success in containing the virus has demonstrated to the world that democratic systems can respond effectively to a pandemic.

Tsai also said that Taiwan’s refusal to give up, embrace of democracy, and commitment to acting as a responsible stakeholder are making the world reassess Taiwan’s value as a “liberal democracy on the frontlines of a new clash of ideologies.”

If Taiwan were to fall, Tsai said, “it would signal that in today’s global contest of values, authoritarianism has the upper hand over democracy.”

Tsai said Taiwan should be regarded as part of the solution, particularly as democratic countries seek to find the right balance between the need to engage and trade with authoritarian countries and the need to defend the values and democratic ideals that define their societies.

While the people in Taiwan have not always achieved consensus over what exactly the future of Taiwan should look like, “the great majority of us regard democracy as the best form of government for Taiwan and are willing to do what is necessary to defend it,” Tsai said.

“Taiwan is ready to be a global force for good, with a role on the international stage that is commensurate with its abilities,” Tsai said.