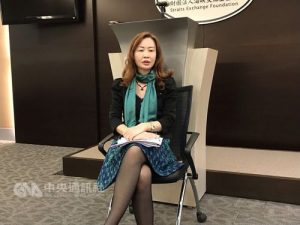 Taipei, Oct. 17 (CNA) The Straits Exchange Foundation (SEF) is willing to invite the head of its counterpart in China to visit Taiwan this year, as 2018 is a milestone for the two organizations, a spokeswoman for the SEF said Wednesday.

Although dialogue between the two sides of the Taiwan Strait has been halted since May 2016, the SEF remains open to exchanges with China’s Association for Relations Across the Taiwan Straits (ARATS), said SEF Deputy Secretary-General Kuan An-lu (管安露) at a press briefing.

Therefore, the SEF is hoping that ARATS president Zhang Zhijun will visit Taiwan this year, which is the 20th anniversary of a historic meeting in Shanghai between the first heads of the two semi-official organizations, Kuan said.

She also said that SEF Chairwoman Chang Hsiao-yueh (張小月) would like to visit China, if there is an opportunity.

SEF and ARATS are intermediary organizations founded in 1990 to handle cross-strait affairs in the absence of formal relations.

In October 1998 then SEF Chairman Koo Chen-fu (辜振甫) and ARATS president Wang Daohan met in Shanghai and decided to resume dialogue between the two sides on economic and political issues.

Koo and Wang first met in Singapore in 1993 for the first direct cross-strait talks since 1949 when the Republic of China government relocated to Taiwan during a civil war.

Cross-strait talks were suspended by Beijing in 1995 to protest a visit by then Taiwan President Lee Teng-hui (李登輝) to the United States.

In May 2016, when President Tsai Ing-wen (蔡英文) of the independence-leaning Democratic Progressive Party took office, dialogue between the two sides was again halted because of China’s discontent with Tsai’s cross-strait policy.

Kuan said the SEF, however, has maintained its institutional operations, and the communication mechanism between the two sides still exists, although Beijing’s unilateral suspension of the cross-strait dialogue has caused problems in the area of exchanges between the people of the two sides.

She urged Beijing not to let political factors stand in the way of cross-strait exchanges.