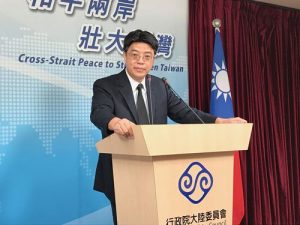 Taipei, Sept. 7 (CNA) The Mainland Affairs Council (MAC) reaffirmed its position on cross-strait relations on Thursday, noting there would be no shift in policy in the wake of recent personnel changes in the Cabinet.

Chiu took the opportunity to reiterate the administration’s policy goal of promoting peaceful and stable development of cross- strait ties and maintaining the status quo.

“The government is one body and speaks with one voice,” the vice minister said.

He added that the government would handle cross-strait affairs in accordance with the Constitution of the Republic of China and the will of the people.

The administration will continue to promote good cross-strait ties while defending Taiwan’s sovereignty, dignity and the rights of its people, he continued.

“Such a policy stance is in the best interest of Taiwan and parties in the (East Asian) region,” he said.

Chiu responded that Taiwanese society has rejected the idea of “one country, two systems” — as can be seen from repeated polls on the issue as well as statements by major political parties in Taiwan.