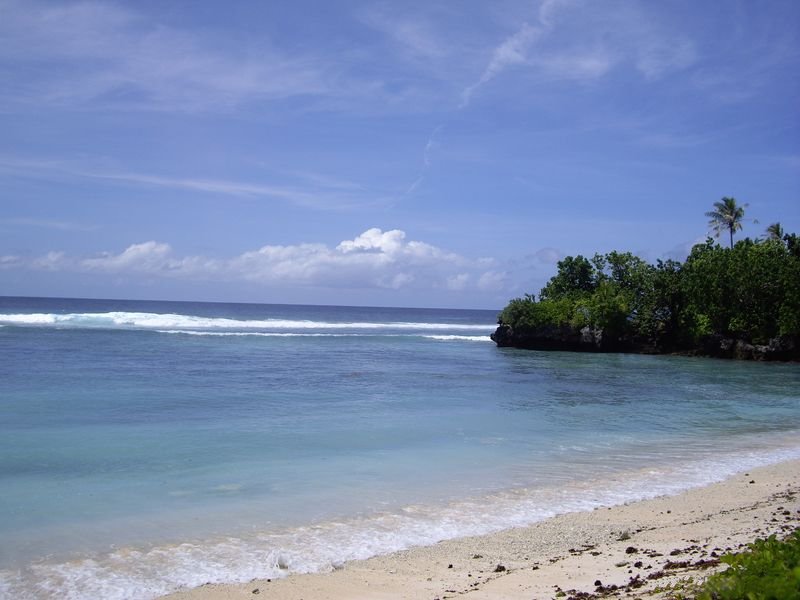 A study by ForwardKeys reveals that the imposition of new UN sanctions, followed by the ratcheting up of hostile rhetoric between Donald Trump and Kim Jong Un on 9th August, triggered a decline in tourism to Guam. It was then that Donald Trump warned that any threat to the USA would be met with “fire and fury” and Pyongyang responded, saying it was “carefully examining” a plan to strike Guam, home to a US military base. In the five weeks that followed, arrivals of people staying between four and twenty-one nights (a typical tourist visit), fell by 9%, with arrivals from Japan, traditionally Guam’s most important origin market, falling 30%. 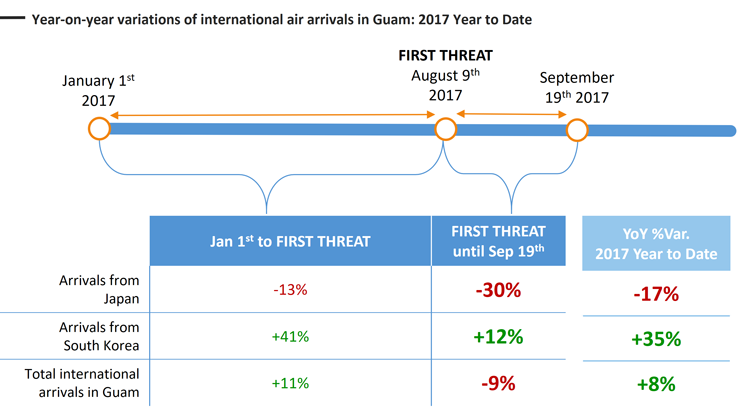 The fall in travel to Guam would have been much more substantial, were it not for a remarkable rise in enthusiasm for the Pacific island from South Korea. Prior to 9th August, arrivals in Guam were up 11% but that was due to a 41% increase in travel from South Korea, off-setting a 13% decline in visits from Japan.

In producing its reports, ForwardKeys analyses more than 17m flight booking transactions a day, drawing data from all the major global air reservation systems and selected airlines and tour operators. This information is enhanced with further independent data sets, including flight search and official government statistics plus data science to paint a picture of who is travelling where and when, and to predict future travel patterns.

Looking deeper at people’s plans to travel to Guam by analysing travel bookings made to date (for stays of the same duration), it is clear that after 9th August, overall bookings fell by 43%, benchmarked against the same period last year and bookings from Japan fell by 65%. By comparison, bookings from South Korea fell by 16%. 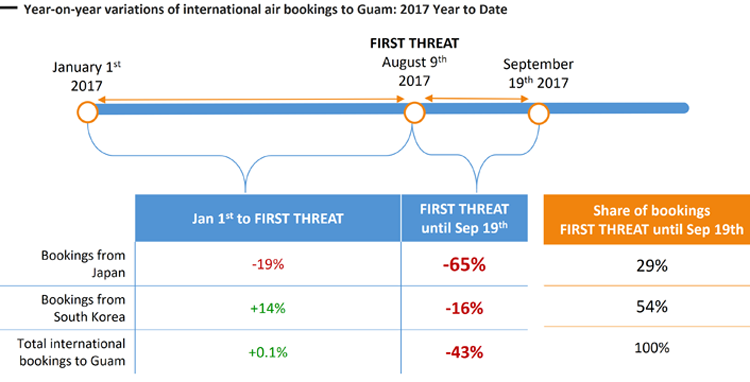 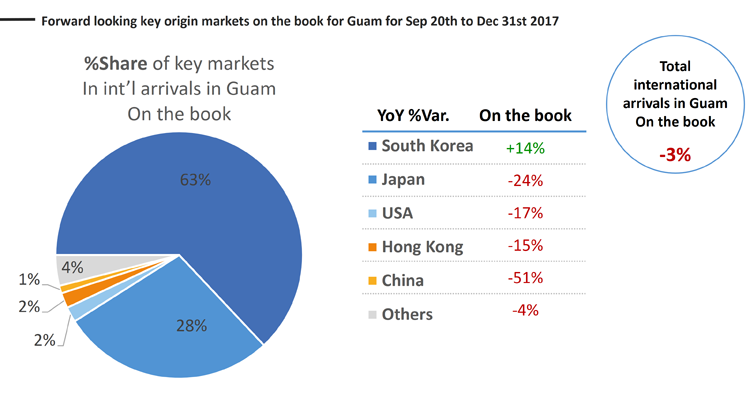 The strong growth in bookings can be partly attributed to increased air capacity between Guam and South Korea. From 13th September 2017, Air Seoul became the sixth carrier from Korea to provide direct services to Guam. The initial schedule is a five times weekly operation but Air Seoul will increase this to daily operations in October.

Mario Hardy, CEO, Pacific Asia Travel Association, commented: “We live in a world of constant volatility, uncertainty and political instability which is of great concern for many destinations around the globe. The island of Guam is beginning to feel the impact of the war words between two nations’ leaders and reminds us of the fragility of the travel and tourism industry.”

Olivier Jager, CEO, ForwardKeys, concluded: “Whilst the stall in bookings for Guam is a concern, current bookings are a snap-shot as of now and it is still possible for the momentum to recover, if for example, the sabre-rattling has caused people simply to book later (ie: closer to the date of travel) rather than not to come. One cannot be surprised that the escalating tension between North Korea and the USA has deterred visitors to Guam. What is interesting is the extraordinary extent to which the South Korean market is the ‘white knight’, bucking the trend. I can only speculate that South Koreans have been enthused by Guam’s promotional claims that it is the perfect destination for romance – and by going there, are demonstrating they are much more interested in making love than war!”