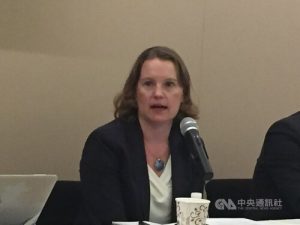 Washington, Dec. 9 (CNA) A U.S. State Department official warned Monday that allies of Taiwan who switch recognition to Beijing could be imperiling their sovereignty, citing risks such as debt and Chinese influence in domestic policymaking.

Speaking at the Global Taiwan Institute in Washington, Jennifer Spande, deputy director for Australia, New Zealand and Pacific Islands, reaffirmed the U.S. position that the Chinese campaign to steal Taiwan’s diplomatic allies is a threat to stability in cross-strait relations.

Spande said the U.S. was not trying to dictate to anyone, but rather counseling prudence regarding the sovereignty issues involved in changes in policy by Taiwan’s allies in the Pacific, so that the countries can remain “free from foreign coercion or domination.”

“A region in which countries maintain their freedom of choice will be a more prosperous and secure one,” Spande said.

China has successfully pressured seven countries around the world (including two in Oceania) to sever formal ties with Taiwan and recognize Beijing in the last three years, leaving Taiwan with only 15 diplomatic allies.

Despite the trend, however, newly-elected governments in both the Marshall Islands and Tuvalu have reaffirmed their support for Taiwan, Spande said.

Spande highlighted comments by Tuvalu Foreign Minister Simon Kofe, who said the risks of relations with China include debt as well as pressure to allow the construction of artificial islands and military bases.

More broadly, Spande praised Taiwan as a long-term partner in the Oceania region that works with the U.S. in areas such as natural disaster response, environmental protection and efforts to strengthen the rule of law, and she said the U.S. government hoped to expand areas of bilateral cooperation.

As an example, Spande cited the presence of the State Department’s senior official for APEC, Sandra Oudkirk, at the inaugural U.S.-Taiwan Pacific Islands Dialogue, which was held in Taipei in October.

(By Chiang Chinye and Matthew Mazzetta)Enditem/ls