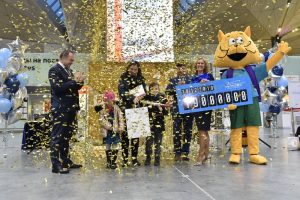 On December 18, Pulkovo St. Petersburg Airport welcomed its 19 millionth passenger in 2019, marking the airport’s historic record in traffic figures for one calendar year. The previous highest number was 18.1 million, a mark that Pulkovo Airport reached in 2018.

“It is symbolic event that this year the record-breaking 19 millionth passenger departed with Rossiya Airlines, Pulkovo Airport’s home base carrier and longtime reliable friend. We are grateful to our partners for successful collaboration, and the passengers for their trust in choosing St. Petersburg gateway as the point of departure and destination for travelling. The outgoing year was full of premieres: Pulkovo expanded its route network with 14 new destinations, we welcomed three new foreign airlines and handled the first-ever most technologically advanced Airbus A350 aircraft. E-visas created new opportunities for traveling to St. Petersburg for the citizens of 53 countries. Ending this year with a new record, we look ahead with confidence. Pulkovo Airport will continue its development as an international aviation hub by making the travelling to St. Petersburg more convenient and providing the passengers with direct flights to a wide range of destinations both in Russia and abroad.”

“St. Petersburg is the main point of Rossiya Airlines route network from which the company provides all year round services to almost 50 destinations. Establishing a high-capacity transportation hub based at Pulkovo Airport is one of our highest priorities,” said Chief Executive Officer of Rossiya Airlines Sergey Aleksandrovsky. “Based on 2019 results, our company, by expanding the flight programme and launching new routes, achieved good performance results in our historic homeland, 6 million passengers, which is over 10% more than in the previous year. We will go the extra mile. Rossiya plans to have two flights per day next summer to key scheduled touristic destinations, such as Antalya, Larnaca, Prague, Rome, Milan and Munich. There will be more flights to Rimini. We also plan to expand the schedule of domestic flights from St. Petersburg: in the summer, Rossiya will have two flights per day to Yekaterinburg, Mineralnye Vody and Kazan. By increasing passenger traffic as a result of developing St. Petersburg within its own route geography, Rossiya is creating a steadily developing transit hub both for Russian and foreign travellers.”

The record passenger of Pulkovo Airport in 2019 was Astrid Wenkel departing with her children for Berlin with Rossiya Airlines flight SU6639. Pulkovo Airport congratulated the traveler and presented her with a set of exclusive gifts from the airport: a free pass for visiting the VIP lounge during the next trip through Pulkovo as well as certificates from Pulkovo Airport’s partners, coffee shop chain Shokoladnitsa and Dufry Duty Free store. Rossiya Airlines presented the record passenger with an aircraft model and a ticket for a flight within its route network. Pulkovo Airport mascot Yellow Cat, greeted guests in the check-in hall. Travelers were treated with handmade delights, biscuit cakes and pastries.

Rossiya Airlines is one of the five largest carries at Pulkovo Airport in terms of passenger traffic. In January-November of 2019, the airline served in St. Petersburg over 5.3 million passengers, which is 5% more than in the same period of 2018. The route network of Rossiya Airlines at St. Petersburg airport includes over 50 Russian and foreign cities.

Pulkovo Airport is the fourth airport in Russia in terms of passenger traffic. The route network of St. Petersburg airport includes 163 domestic and international destinations with regular flights operated by 72 airlines. In 2019, St. Petersburg airport, for the fourth year in a row, became the winner of the national ‘Air Gates of Russia’ award, according to the passengers’ votes. Since 2010, Northern Capital Gateway LLC has been the main operator of Pulkovo, implementing the airport reconstruction and development project under a public-private partnership agreement with the city of St. Petersburg.

Rossiya Airlines is a part of Aeroflot Group and is currently one of the largest air carriers of the Russian Federation. The headquarters of the airline are historically located in St. Petersburg. Rossiya Airlines is Pulkovo Airport’s home base carrier. The route network of the airline includes more than 130 domestic and international directions. The fleet of the company consists of modern aircrafts: Boeing 747, Boeing 777, Boeing 737NG, Airbus A320 and Airbus A319.