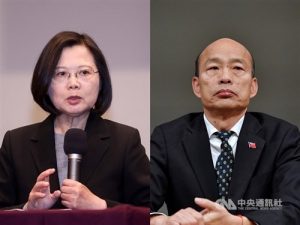 Taipei, Jan. 2 (CNA) The three candidates running for president in Taiwan’s Jan. 11 election announced Thursday they would temporarily suspend their campaigns, after eight armed forces members, including Chief of the General Staff Shen Yi-ming (沈一鳴), were killed in a helicopter crash earlier that day.

President Tsai Ing-wen’s (蔡英文) Democratic Progressive Party (DPP) said it would observe a period of mourning by suspending all campaign activities from Thursday through Saturday.

In a separate statement, Tsai said she had traveled to Yilan on Taiwan’s eastern coast to oversee recovery efforts at the crash site, and had ordered the Ministry of National Defense (MND) to begin an investigation into cause of the accident.

As a sign of mourning, national flags at military installations around the country will be flown at half-mast for three days, Tsai said.

Meanwhile, Kuomintang (KMT) presidential nominee Han Kuo-yu (韓國瑜) issued a statement paying tribute to the victims of the crash, while urging people to pray for the recovery of the five survivors.

The KMT likewise announced that it would suspend campaigning for a two-day period in the wake of the accident.

People First Party (PFP) nominee James Soong (宋楚瑜) canceled his campaign schedule for Thursday and Friday, and called on Tsai to focus on stabilizing the military’s command structure, following the death of its highest-ranking officer.

According to the MND, Thursday’s crash occurred when a UH-60M Black Hawk helicopter with 13 people on board was forced to attempt an emergency landing in a mountainous area of New Taipei City’s Wulai District.

The chopper was traveling from Taipei to a military base in Dong’ao, Yilan County, where Shen was scheduled to visit troops in advance of the Lunar New Year, the ministry said.