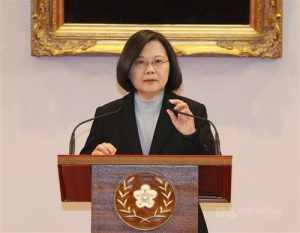 Taipei, Jan. 4 (CNA) President Tsai Ing-wen (蔡英文) issued a three-point statement Saturday reaffirming her government’s commitment to political freedom, following the resignation of her presidential campaign spokeswoman a day earlier over comments that appeared to suggest that proponents of unification with China are committing treason.

During an interview with German broadcaster Deutsche Welle on Thursday, Lin Ching-yi (林靜儀) said that in terms of national sovereignty, proposing unification with a hostile power like China constitutes “treason.”

The remarks were seen as highly controversial, coming just days after the Democratic Progressive Party (DPP) rammed an anti- infiltration law through the Legislature Dec. 31 that criminalizes political activities backed by hostile foreign forces such as China, and barely a week ahead of Taiwan’s Jan. 11 presidential and legislative elections.

Lin apologized Friday, claiming that she misspoke and resigned from her position as campaign spokeswoman.

On Saturday, Tsai responded to the controversy in a Facebook post, saying that Lin’s poorly expressed remarks had “caused a misunderstanding.”

In a three-point statement, Tsai referred to several aspects of Lin’s interview, while also seeking to quell lingering political tension over the anti-infiltration law, which the opposition Kuomintang (KMT) has argued the government could use to level unsubstantiated accusations.

First, Tsai said, “defending democracy is one of our core values, and we have never viewed opposing political views as treasonous.”

While the debate over unification and independence has always been a part of Taiwan’s political discourse, both views are subject to free speech protection, she said, contrasting her government’s position with the prohibition on dissenting views enforced by the KMT during Taiwan’s pre-democratic period.

Tsai’s second point referred to a portion of Lin’s interview in which she discussed the possibility of changing Taiwan’s official name — the Republic of China.

Tsai said that in spite of Taiwanese people’s differing political views, they are united by their broad support for the democratic form of government.

“Our country’s name is the Republic of China, and its sovereignty is in the hands of its 23 million people. Therefore there is no reason to change the country’s name,” she said.

Third, Tsai wrote that her most important responsibility as president is to protect the country’s sovereignty and the free and democratic way of life of its people.

Given the broad consensus against the “one country, two systems” policy supported by China, Tsai said Taiwan’s people constitute its strongest defense against foreign threats to its democracy.

The DPP, meanwhile, issued a separate response, stating that in Taiwan’s democratic system, no party, including the DPP, has the right to make prescriptive decisions on behalf of the people.