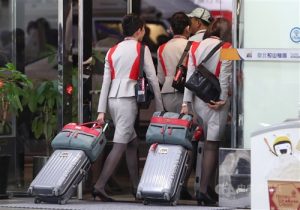 Taipei, Dec. 12 (CNA) Taoyuan Pilots Union on Thursday condemned Far Eastern Air Transport Corp (FAT) after an unexpected announcement earlier in the day that the company will end all flight operations starting Friday, calling on the government to help FAT pilots find work at other airlines.

In a press statement, the union said FAT’s announcement clearly violated labor laws that stipulate a 60-day notice to the labor authorities before major layoffs.

The decision by FAT also seriously infringed on the rights of its 1,000-plus employees and customers. The union urged the government to step in and compel the airline to offer remedies that safeguard the rights of its staff.

The Taipei-based medium-sized international carrier announced Thursday on its website that all flight operations would end with effect from Friday, due to financial difficulties. However, later that evening, the company’s online statement was revised to read that operations are being “suspended” rather than terminated.

That change came after an earlier follow-up press event by FAT Deputy General Manager Huang Yu-chi (黃育祺) caused confusion when he said the airline was “suspending” flight operations temporarily due to a shortage of funding, which he estimated as being around NT$30 million (US$979,751).

Huang promised to protect the rights of the company’s 1,024 employees and said FAT had contacted the Taipei City Department of Labor to discuss layoff issues.

He did not say when or how many staff the airline would sack.

However, according to a purported internal FAT memo circulating online, most of the workforce will be laid off with only a handful retained to deal with the closure of the airline.
Meanwhile, the Taipei City Department of Labor said if the airline proceeds with a major layoff without giving the required 60-day notice, the matter will be reported to the Ministry of Labor, which could take legal action against FAT Chairman Chang Kang-wei (張綱維) and bar him from leaving the country.

Department of Labor head Lai Hsiang-lin (賴香伶) said the department will conduct labor inspections at FAT’s Taipei headquarters Friday to determine if the company is suspending or closing down its operations.
FAT employees that are sacked can apply for government issued unemployment benefits. In addition, a central government fund will also pay the unpaid salaries of FAT staff if the airline cannot pay them for the time being, according to Lai.
A FAT union consultant told CNA that the union is barely operational after many union leaders left the company following a labor dispute in 2017.

The authorities estimate that FAT’s decision will inconvenience 3,408 passengers, while the airline could face a fine up to NT$3 million for not meeting its flight commitments.
Established in 1957, FAT declared bankruptcy in May 2008 but resumed operations three years later and completed bankruptcy restructuring in October 2015.
(By Wu Hsin-yun, Liang Pei-ching and Joseph Yeh) Enditem/AW