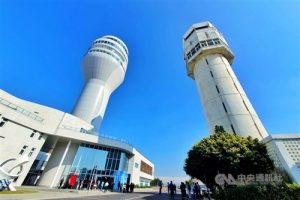 Calling the tower a “new national landmark,” Lin said the control tower’s unveiling represents an important milestone as the airport moves toward becoming a “smart airport” in the future.

Built at a cost of NT$1.27 billion (US$41.6 million) over three years, it is equipped with state-of-the-art technology that integrates 15 different systems, making it easier for air traffic controllers to monitor flight data, Lin said at the inauguration ceremony.

The new tower, he said, will help meet increasing passenger demand as the airport currently handles over 700 flights per day, compared with around 100 when the old control tower was built 40 years ago.

The 65-meter-tall tower is over 20 meters taller than the old control tower, offering air traffic controllers a clearer view of the airport’s runways, and it can sit 11 controllers at one time, instead of four in the old structure.

Those features along with its advanced technology will enable the new control tower to handle 1,000 flights per day, compared to the more than 700 a day at present that was putting stress on the old control tower, according to the airport.

As of Monday, more than 268,000 flights had taken off or landed at the airport so far this year, Lin said, and the government has estimated that the number could reach 400,000 in 20 years.

Beyond the technical features that should give air traffic controllers a better working environment, Lin also highlighted the tower’s design, which was inspired by the unique shape of the “Queen’s Head,” a geological formation in Yehliu Geopark in northeastern Taiwan.

Also at the ceremony, Civil Aeronautics Administration (CAA) head Lin Kuo-shian (林國顯) pointed to another feature of the new control tower that should help air traffic controllers do their jobs — a simulator room for training purposes.

The NT$75 million room, which is three meters high and has a four-meter radius, surrounds air traffic controllers with a 360-degree wall covered with monitors that simulate the airport, and it can be used to have them respond to various scenarios, he said.