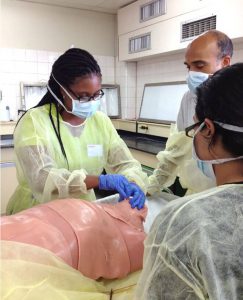 London – The Journal of Surgical Education has published the first-ever study on the global modernisation of Advanced Trauma Life Support (ATLS) training courses, which has prevented thousands of animals from being cut apart and killed, improved surgeons’ life-saving skills, and reduced training laboratory costs.

The study, co-authored by University of Florida College of Medicine–Jacksonville Professor of Surgery Dr Marie Crandall and PETA US Vice President of International Laboratory Methods Shalin Gala, describes a novel collaboration between the TraumaMan medical simulator manufacturer Simulab Corporation and PETA US that has revolutionised the way surgeons in 22 countries learn to treat traumatic human injuries in ATLS courses – using advanced human-simulation technology. The simulators, unlike animals, are anatomically realistic and cost-effective and allow trainees to repeat surgical skills until proficient.

Virtually all programmes teaching the popular American College of Surgeons–sponsored ATLS course in the US, Canada, and other Western nations use Simulab’s TraumaMan simulator or other non-animal methods, but until now, ATLS programmes with limited budgets in other countries have required trainees to cut crude holes into the chests, throats, abdomens, and limbs of thousands of live dogs, goats, pigs, and sheep each year.

“Surgeons around the world deserve the most effective and humane medical training available, and that means using lifelike simulators that bleed, breathe, and mimic human anatomy,” says Gala. “PETA’s collaboration with Simulab Corporation is equipping doctors with the tools that they need to learn to treat human patients while sparing the lives of thousands of animals.”

From 2012 to 2017, PETA US surveyed ATLS programmes in 64 countries. Of the 56 programmes that responded, 18 (32.1 per cent) initially replied that they used non-animal training methods, whereas 38 (67.8 per cent) replied that they used animals for surgical-skills training, citing financial constraints as the primary barrier to adopting human-simulation methods. Through its collaboration with Simulab, PETA US donated 119 TraumaMan models – valued at nearly $3 million – to ATLS programmes in 22 countries. As a result, 75 per cent of the programmes that replied to the survey now use exclusively non-animal simulation models, preventing more than 2,000 animals each year from being mutilated and killed.

PETA – whose motto reads, in part, that “animals are not ours to experiment on or abuse in any other way” – notes that compared to animal-based exercises, TraumaMan systems are more portable and less costly and that, unlike animals, they’re reusable. Studies show that doctors who learn life-saving surgical skills on TraumaMan models are more proficient than th