New record at Brussels Airport with 26.4 million passengers in 2019 in conjunction with fewer flights

In 2019, Brussels Airport hit a new passenger traffic record with 26.4 million passengers. Cargo transport closed the year at 667 thousand tonnes, a drop of 8.8% in line with the European average. The total number of flights fell by 0.4%.

Arnaud Feist, CEO of Brussels Airport Company: “In 2019, Brussels Airport reported a new passenger traffic record, welcoming 26.4 million passengers. The past 10 years, the number of passengers has spiralled from 17 million in 2009 to 26.4 million in 2019, but the number of flights has remained stable over this period. This shows that the growth of our business can be achieved without increasing the environmental impact by using aircraft that are not only bigger and better filled, but also significantly more environmentally friendly.”

The national strike in February, as well as the social tension at Skeyes in the first half of the year and the bankruptcy of tour operator Thomas Cook, which led to the cancellation of many flights, particularly in October, had a limited impact on these results. The bankruptcies of WOW air and fly bmi in the first quarter also had a negative effect.

Full freighter volumes, a sector that is more sensitive to market fluctuations, suffered the sharpest downturn (-15.9%). Integrator services (-6%) also reported a decrease in tonnage for the first time in several years, mainly due to the national strike in February and the situation at skeyes in the first half of 2019. Also affected, but to a lesser extent, by these events, belly cargo, decreased by 2.5%.

Also affected by the slower economic growth, trucked air cargo was down by 11.5%.

Full freighter, which is particularly affected by fluctuations in the European market, levelled off, due to the significant peak at the end of the year, the many additional flights at Brussels Airport and the start-up of Sichuan Airlines Cargo.

Trucked cargo, also impacted by the markets, was down by 4.2%.

In December, the number of air movements rose very slightly by 0.5% compared against the same period in 2018. The number of passenger flights fell by 0.7%. 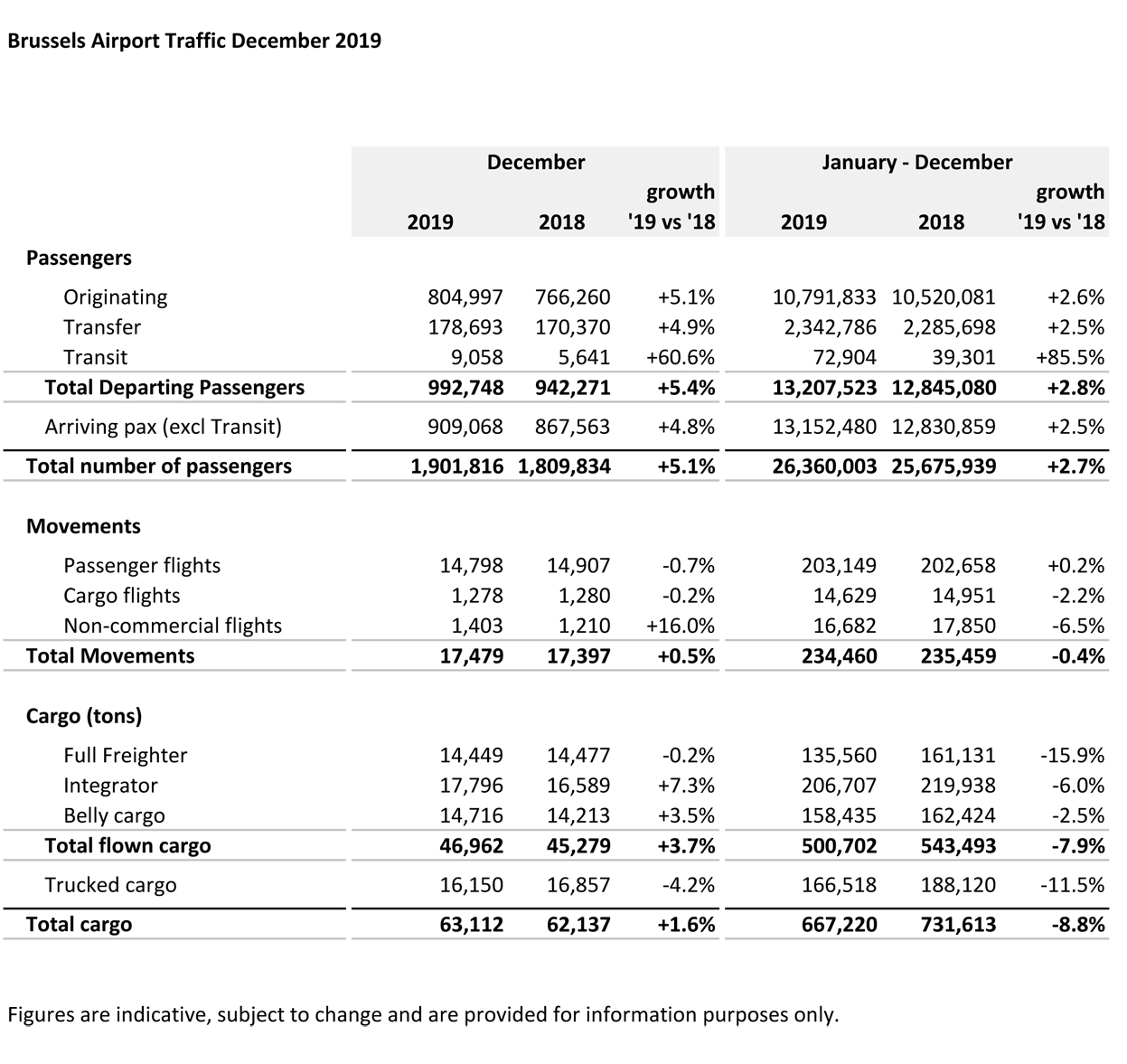