Most Taiwanese in favor of safeguarding cross-strait peace: poll 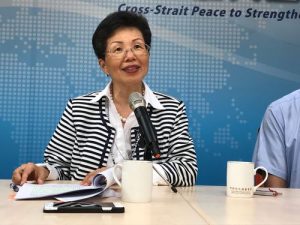 Taipei, Aug. 24 (CNA) A majority of Taiwanese people support the government’s push for cross-strait peace and believe further exchanges between the people in Taiwan and mainland China will help improve stable relations, according to a poll released on Thursday by the Mainland Affairs Council (MAC).

The survey found that 87.8 percent of Taiwanese support the government’s proposal that both sides work to maintain peace and stability across the Taiwan Strait, while 84.8 percent believe a healthy exchange between the people on both sides will help improve relations.

Meanwhile, 64.1 percent of those questioned also showed their support for the government to draw up relevant rules and regulations to improve cross-strait exchanges and interactions.

However, the survey found that 75.2 percent of Taiwanese reject China’s use of political means to suppress Taiwan on the international stage.

The government has always stood by the principle that both sides should respect each other and settle disagreements through communication and dialogue, Chang said.

“We are calling for China to help promote positive interactions and exchanges that seek to optimize the benefits for both sides,” she added.

Beijing has suspended dialogue and contacts with Taiwan’s government since Taiwanese President Tsai Ing-wen (蔡英文) came into office in May 2016 and has taken action to apply pressure on her government. Tsai has refused to accept China’s condition that in order for relations to develop, she must embrace the concept that there is only one China, with each side free to interpret what that is.

The survey, conducted from July 31 to August 2 by Taiwan Real Survey, collected 1,079 valid questionnaires by telephone, and has a confidence level of 95 percent and a margin of error of plus or minus 2.98 percentage points.