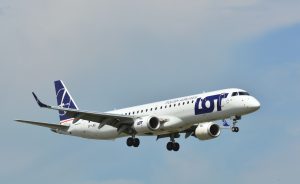 LOT will offer 13 flights per week on Warsaw-Oslo route to be operated twice a day: in the morning and in the evening on a daily basis (except Saturday). On Saturday LOT will operate only the morning flight.

The flights on Warsaw-Oslo route will be operated using Embraer 195 with a seat capacity of 112 passengers in three travel classes: business, economy premium and economy. The flight will last for two hours. The connection is addressed to businness passengers and travellers. It is well integrated with LOT’s network of connections, allowing short transfers on flights to many destinations worldwide.

“Thanks to flights recently offered by LOT, passengers from Warsaw, Polish regional airports and a number of airports in Central and Eastern Europe will be able to fly into Oslo in the morning and return in the evening, which is very important for passengers travelling for businness,” says Adrian Kubicki, Director of Corporate Communications. “Whereas passengers travelling from Oslo will be able to benefit from numerous convenient connecting flights from Warsaw to 72 destinations around the world as part of LOT’s network. For passengers from Oslo the Warsaw Chopin Airport will become a gateway to Central and Eastern Europe and the Balkans and will allow convenient connections to the Far East,” he adds.

Oslo is the 19th destination launched by LOT this year. The development of the network of connections is one of key elements of LOT’s profitable growth strategy in force since 2016. Thanks to that strategy, LOT have succeeded in improving their financial performance, developing the fleet and network and expanding the range of services. 2017 is the second consecutive year of LOT’s dynamic growth. Last year Polish flag carrier launched the highest number of routes among all airlines in Europe.

Tickets for flights on Warsaw-Oslo route are available for sale via all LOT sales channels, including the lot.com website, LOT Travel Agency and LOT Contact Center, as well as travel agents.