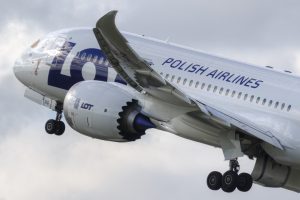 Warsaw, 19 October 2017 – Precisely one year after the launch of the connection, LOT summed up the first 12 months of its presence in South Korea. Until mid-October 2017, in total 67 thousand passengers benefitted from the direct flights and the aircraft load factor was on average 83%. Such excellent performance proves the potential for the connection’s expansion and the rise of the tourist and business traffic between Poland, the CEE region and South Korea.

“We were convinced right from the beginning that the launch of the connection to Seoul was going to be the bull’s eye. It proved us right and it even turned out that the connection has been growing at a faster rate than expected. The success of the flights on the Warsaw-Seoul route was much greater than we had anticipated,” says Adrian Kubicki, Director of Corporate Communicatios. “As a new player on the Korean market we opened the winter season last year with three flights per week. Just six months later the number of our flights went up to five per week and we have been working on launching daily flights to Seoul soon,” adds Adrian Kubicki.

Opening direct flights always releases the potential in the tourism sector. Thanks to LOT’s flights to Seoul, in the past year many Poles decided to visit South Korea even though they had not intended to do that preliminary. Between January and May 2017 the number of passengers travelling only from Poland to Korea rose by 42% vis-a-vis a corresponding period last year. Same as Korean passengers who decided to fly by LOT and take an opportunity to visit and discover beautiful Polish regions and cities such as Warsaw, Kraków, Wrocław, Gdańsk and Poznań.

To passengers flying in from South Korea LOT offers convenient transfers via its Warsaw hub located in the central part of Europe as well as connecting flights to other European destinations. The advantages of travelling via Warsaw to Europe include less than 60 minutes connecting time, comfortable check-in desks and lounges as well as a broad range of flights to numerous destinations all over the world.

During the year of direct flights operated on the Warsaw-Seoul route the share of point-to-point traffic on that route was high and stable. Also the share of transfer passengers taking advantage of quick transfers via LOT hub at Warsaw Chopin Airport was important as regards overall traffic figures. In total until mid-October the average load factor for LOT’s aircraft operated on the Warsaw- Seoul route reached 83% per annum.

“As regards the structure of the passenger traffic on the Warsaw-Seoul route we have also observed a significant rise of the share of passengers travelling on business trips who found LOT Business Class and Premium Economy Class dedicated flights attractive. Economic data show that for the first time in years, 2017 marked a revival in trade relations between Poland and Korea which clearly demonstrates that the further growth of the direct connection is one of key factors fostering the development of economic and tourist relations between the two countries,” says Adrian Kubicki.

LOT Cargo’s performance in the past year was also reflected by these data. “We have been working together with the largest Korean technological concerns as regards exports and imports of goods between Korea, Poland and the CEE region, including Samsung and LG, Samsung, Philips, General Motors, 3M, Hyundai. Thanks to the direct flight we have become the largest exporter of certain products to South Korean, for example, we have been shipping 20-30 tons of chokeberry to Korea on board of Dreamliners on a weekly basis,” recaps Adrian Kubicki.

The flights on the Warsaw-Seoul route are operated using the most modern aircraft in the world, Boeing 787 Dreamliners. There are three travel classes for passengers to choose from: business, premium economy and economy. Especially for passengers travelling on that route LOT introduced, among others, a dedicated menu and beverages while the on-board entertainment system with a broad selection of movies is available in the Korean language version. Furthermore, there will always be a Korean-speaking crew member on board the Warsaw-Seoul flights.

Several mid-haul flights in LOT’s network will be operated by state-of-the-art narrow-body aircrafts available on the market, Boeing 737 MAX 8s, to be soon delivered to LOT. In the first quarter of 2018 the Polish carrier will be also provided with new, larger Boeings 787-9 to be operated on long-haul flights, with the capacity of 294 seats.

The launch and expansion of the connection on the Warsaw-Seoul route is one of the elements of LOT’s profitable growth strategy that the Polish carrier have been implementing since the beginning of 2016. During that time LOT has launched the highest number of connections among all airlines in Europe, including flights from Warsaw to, i.e., Los Angeles, Newark, Seoul, Tokyo and from Kraków to Chicago. In May 2018 LOT plans to launch direct flights from locations outside of Poland, that is, from Budapest to New York City and Chicago.

Tickets to Seoul are available through all sales channels including lot.com website, at LOT Contact Centre, LOT Travel offices, and through the agents.