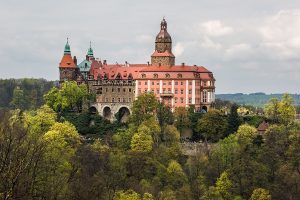 Ksiaz Castle, also called the Pearl of Lower Silesia is one of the greatest visitor attractions in the region. Erected in the 13th century, Ksiaz castle was home to many noble families such as the mighty House of Hochberg. Between 1509 and 1941, the Hochberg’s expanded the castle and significantly contributed to its splendor. During the World War II the castle was taken over by the occupying German forces. Under their reign numerous historic chambers were destroyed. The Nazis created a system of tunnels underneath the castle, which the function still remains a mystery. Recently the Ksiaz castle made news as a rumor of a lost Nazi gold train was believed to be buried in the vicinity of the castle.

After systematic looting committed by the German occupiers and later by the Red Army, in 1952 the renovation work was undertaken to restore the Ksiaz Castle to its previous grandeur.

Today, visitors can admire the majesty of numerous chambers, terraces and surrounding gardens. The underground tunnel is also available to the public. Those visitors wishing to spend a night, Ksiaz Hotel is conveniently located nearby the castle.