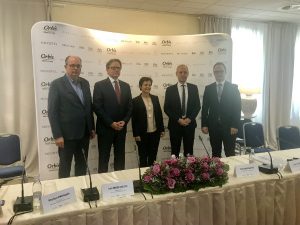 The Orbis Hotel Group, strategic partner of AccorHotels – the world-leading travel and lifestyle group – in Eastern Europe, is continuing its development in the region at a rapid pace. The Group is further expanding its network, and this time it’s coming to Slovenia and Maribor. In cooperation with Terme Maribor, Orbis Hotel Group is opening Mercure and Ibis Styles hotels in the second largest Slovenian city.

The Orbis Hotel Group is one of the world’s most important travel and lifestyle organisations and the sole licensor of all brands of AccorHotels in Eastern Europe. The group is entering Slovenia by signing franchise agreements for Mercure and Ibis Styles hotels with its local partners and investors. Terme Maribor hotels will become part of a global group with more than 4,200 hotels worldwide in 95 countries.

AccorHotels Group includes 20 hotel brands, from luxury to middle range. Among them are Sofitel, Ibis, Novotel, and luxury brands Raffles and Legend. From 2018, the current Piramida hotel, with 76 rooms, will join the Mercure chain, while the Orel Hotel with its 71 rooms will join the Ibis Styles network. Both hotels will be fully upgraded according to the latest requirements of Mercure and Ibis Styles. The hotels will appear on the market with their new names in January 2018.