International aviation growth slowed to 4.5% in 2019 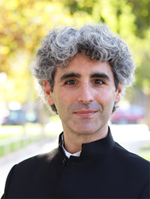 The latest data from ForwardKeys, which analyses global aviation capacity, flight searches and over 17 million flight booking transactions a day, reveals that in 2019 growth in international air travel, as measured by passenger journeys, grew by 4.5%. That is healthily ahead of global economic growth, but it is significantly slower growth than last year, 6.0%; and it is slower than the trend over the last decade, which averages 6.8% per annum. However, the outlook for the coming three months is considerably more optimistic, with international flight bookings as at 1st January 2020 standing 8.3% ahead of where they were at the start of 2019.

Olivier Ponti, VP Insights, ForwardKeys, commented: “Usually, aviation grows around three percentage points ahead of global GDP. However, in the past year, we have seen several events which have held back growth; these include US trade disputes with Canada, China, Mexico and the EU, riots in Chile, France, Hong Kong and India, the grounding of the relatively new Boeing 737 Max aircraft, terrorism in Sri Lanka, the emergence of ‘flight shaming’ and the bankruptcy of Jet Airways.”

The stand-out region in terms of international aviation growth in 2019 was Asia Pacific, where international outbound travel grew by 7.7%, reflecting the strong economic growth of the region. Travel between countries in the Asia Pacific region grew even more strongly, by 8.7%. Europe did particularly well as a destination, registering 11.7% growth from the Asia Pacific market, boosted by new routes, following the successful EU-China tourism year.

The second placed region was Africa. There, international travel grew by 7.5%. The most significant drivers were increases in capacity and in routes by Ethiopian Airlines – capacity between Addis Ababa and Delhi, Guangzhou, Jakarta, Manila and Seoul, and new flights to Bangalore from Addis and New York from Abidjan. Other airlines also added African routes, including Air China between Johannesburg and Shenzhen, China Southern between Nairobi and Shenzhen, Kenya Airways between Nairobi and New York, LATAM Airlines between Johannesburg and Sao Paulo and Royal Air Maroc between Casablanca and Boston and Miami.

The third placed region was the Americas, where international outbound travel grew by 4.8%. Travel between countries in the region grew by 3.2%. The notable performance was growth in travel to other regions of the world, which was up 6.8%, helped by the continued strength of the dollar, new connections to many parts of the world and the recovery of Egypt and Turkey as destinations.

Outbound travel from Europe grew by 3.7%. Travel between European countries grew by 3.3% and travel to other continents grew by 5.5%. 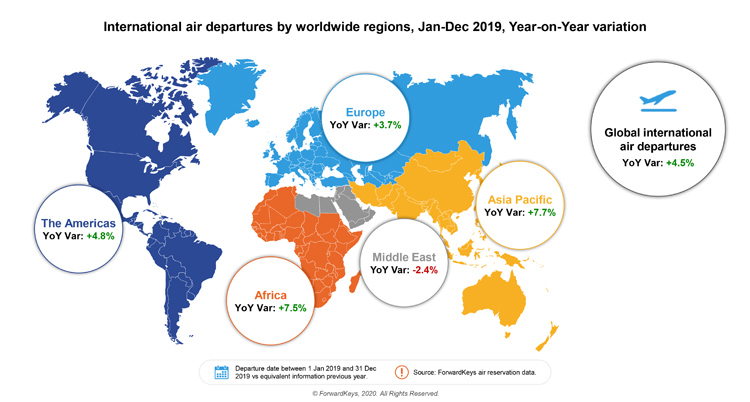 Looking to the future, the global picture is much rosier; and Africa is the stand-out market. As at 1st January, international outbound bookings are ahead 12.5%, 10.0% to other African countries and ahead 13.5% to the rest of the world. As a destination, Africa is also set to do well, as bookings from other continents are currently ahead by 12.9%.

The second most promising outbound market is Europe, with international forward bookings for the first quarter 10.5% ahead. Bookings between European countries are ahead 9.6% and bookings to other continents are ahead 11.8%.

The continued strength of the dollar appears to be a driver of what’s happening in the Americas, where international flight bookings are 4.7% ahead. There, bookings to other countries within the Americas are ahead by just 1.7% but ahead by 8.8% to other continents.

The travel outlook for the Middle East is starting to look up. International first quarter, forward bookings are 2.2% ahead of where they were on 1st January 2019. Between countries within the region, bookings are ahead 6.8% but long-haul bookings are ahead by just 0.4%. However, ForwardKeys’ data pre-dates the assassination by the USA of Qasem Soleimani, an event which could alter the outlook for travel, particularly if the political situation deteriorates further. 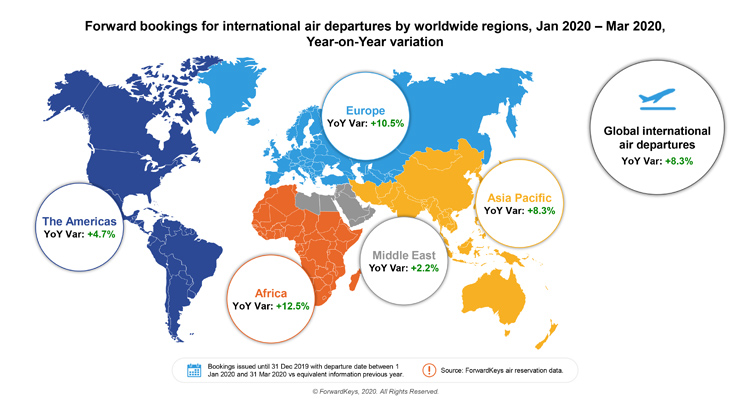 Olivier Ponti, VP Insights, ForwardKeys, concluded: “Travel in the first quarter of 2020 looks set to be buoyant, with long-haul travel showing notably stronger growth than intra-regional travel. This is encouraging news for the industry as the further people travel, the more they tend to spend.”