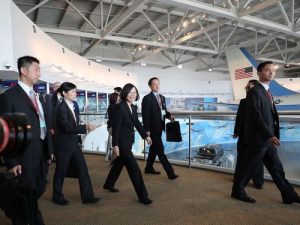 Los Angeles, Aug. 13 (CNA) Taiwan President Tsai Ing-wen (蔡英文) praised former U.S. President Ronald Reagan for standing up for the values of democracy and freedom and voiced her appreciation for his support of Taiwan during a visit to the Ronald Reagan Presidential Library on Monday.

Tsai evoked Reagan in telling gathered Taiwanese media, “Anything can be negotiated except that our freedom and our future cannot be compromised.”

“I believe this is also how we Taiwanese feel now,” Tsai said, referring to current relations between Taiwan and China, which claims Taiwan as part of its territory.

The quote apparently goes back to something Reagan said after failing to agree with then Soviet leader Mikhail Gorbachev on arms reduction in Iceland in 1986: “I went to Reykjavik determined that everything was negotiable except two things: our freedom and our future.”

The library, situated in Simi Valley, California, some 64 kilometers northwest of downtown Los Angeles, is also the final resting place of Ronald Reagan, who served as president of the United States from 1981 to 1989, and his wife Nancy Reagan.

In January 1979, diplomatic relations between the Republic of China (Taiwan) and the U.S. were severed as Washington established diplomatic links with Beijing.

Although Reagan had never made good on his election promise to resume the ties during his eight-year tenure, he was friendly toward Taiwan.

In 1982, he approved the Six Assurances toward Taiwan, which include U.S. pledges on arms sales and assurances not to pressure Taiwan into negotiating with Beijing or to formally recognize Chinese sovereignty over Taiwan.

Tsai said the Six Assurances have been an important foundation of the U.S.’s Taiwan policy.

“For Taiwan-U.S. relations to be able to develop in a stable and solid manner over the past several decades, Reagan’s contributions during his tenure cannot be forgotten,” she said.

Tsai is the third president of Taiwan to have visited the library during an overseas trip, following Ma Ying-jeou (馬英九) in 2014 and Lee Teng-hui (李登輝) in 2001.

It was the first time, however, that Taiwan-based reporters traveling with a Taiwanese president were allowed to file stories from U.S. soil.

Before departing Los Angeles for Paraguay, Tsai thanked the U.S. for the arrangements it made for her U.S. stopover.

Tsai arrived in Los Angeles on Sunday for a transit stop en route to Paraguay and Belize, two of Taiwan’s 18 diplomatic allies.