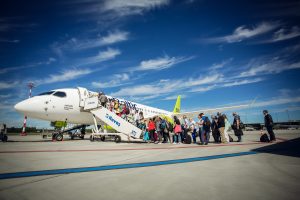 Riga. In September 2017, the Latvian airline airBaltic carried 342 645 passengers or 24% more than in the same period of 2016. For already the fourth month in a row it has been the biggest number of transported passengers in the airline’s history. During the first nine months of 2017, airBaltic has transported a total of 2 688 016 passengers to its network spanning Europe, Scandinavia, Russia, CIS and the Middle East.

Martin Gauss, Chief Executive Officer of airBaltic: “This year we are showing great results and we are looking forward to the next year with excitement. In the future, we will grow further – with modernized fleet and extended route map we will be able to offer even better connectivity between the Baltics and the rest of the world. We are happy to take our passengers on this journey and offer wide variety of destinations.”

The 15-minute flight punctuality indicator for airBaltic reached a level of 85.2% in September 2017. This means that more than 85 of every 100 airBaltic flights departed at the planned time or with a delay of no more than 15 minutes. The flight punctuality indicator during the first nine months of 2017 reached a level of 87.1%.

For the summer season of 2018 airBaltic has added Malaga (Spain), Lisbon (Portugal), Split (Croatia), Bordeaux (France) and Gdansk (Poland). A complete schedule of airBaltic flights can be found on the company’s homepage at www.airbaltic.com.