In an open letter published this November 26, 2019, Brigitte Bardot denounced the sale of kangaroo meat in French supermarkets 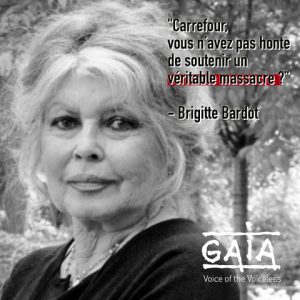 Given the revelations of animal cruelty and danger to public health , the Brigitte Bardot Foundation asks the authorities and the French supermarkets (Auchan, Cora, Carrefour France and Belgium) a clear measure: the end of the import and trade kangaroo meat in France.

You’re not ashamed to support a massacre as ecology, biodiversity, species protection and veganism are booming?

You do not expose your tired stalls trays of bodies, pieces of animal flesh full of suffering that the long and painful agony should induce vomiting? Now, you have kangaroos who suffer unspeakable atrocities, shot dead the night, the failures condemn adults to a slow death and babies in the pouch of their mother are killed by violent blows to the skull or by decapitation, or then abandoned to a slow death and lonely.

The carcasses are then cut and transported in open vehicles, exposed to dust and insects for hours without medical supervision! All this to supply the European market of unsafe meat, cleaned with lactic acid to hide E. coli and Salmonella, as could check my Foundation through laboratory tests on pieces sold in your stores.

As when dogs and cats? You think you’re human, but you are accomplices of the assassins.

So STOP to these inhuman monstrosities, these massive destruction for power, money.

Give the beautiful and good example, others will follow you.