In addition, in July and August 2019, the Spanish airline will operate ten weekly flights between Madrid and Lima

Madrid, 10 September 2018 – As Iberia completes its flight programme for the 2019 summer season, its has announced that it will offer its newPremium Economy class on its flights to Havana and Johannesburg, while boosting capacity on Madrid-Lima and Madrid-São Paulo routes. 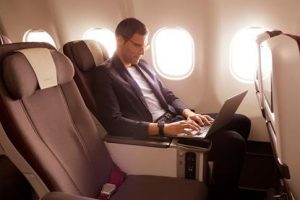 At the start of the 2019 summer season, Iberia passengers flying to Havana and to Johannesburg may opt for the new Premium Economy class available on the Airbus A330-300s the airline will operate on these routes.

Iberia’s A330-300s have 29 Business class seats, 21 seats in Premium Economy, and 242 in Economy. The Premium Economy is designed for Economy class passengers who are willing to pay a little more for a lot more comfort, plus extra services in the air and on the ground.

The Premium Economy cabin features include:

More Capacity on Routes to Lima and São Paulo

July and August 2019, Iberia will offer ten return flights a week on the Madrid-Lima-Madrid route, up from the current frequency of one daily flight. Pending final approval by the authorities, the additional three flights will operate on Mondays, Thursdays and Saturdays from Madrid, returning on Tuesdays, Fridays, and Sundays. The schedule of flights connecting the Spanish and Peruvian capitals will be as follows:

The additional flights will be operated with A340-600s, configured with 36 seats in Business class, 23 in Premium Economy, and 300 in Economy. The total number of additional seats on the route will amount to 2,154 per week.

Starting in April 2019, Iberia will useAirbus A340-600s for its daily flights between Madrid and São Paulo,replacing the A330-300s being used this summer. The change of aircraft adds nearly 1,000 more seats each week.

Iberia currently operates a total of 374 long-haul flights each week to 27 cities in Latin America, the United States, South Africa, China and Japan.

Further information and bookings on iberia.com and other sales channels.

About Iberia: Iberia is the leading carrier on routes between Europe and Latin  America and it flies to 130 destinations in 47 countries in Europe, the Americas, Africa, Middle East and Asia. Together with its subsidiary Iberia Express and its franchise partner Iberia Regional/Air Nostrum, it operates about 600 flights each day with a fleet of some 135 aircraft. It offers easy and convenient connections at its hub in T4 in Madrid-Barajas airport. In 2016 and 2017, Iberiawas the world’s most punctual airline according to FlightGlobal Incorporating FlightStats, while it was awarded its 4th Skytrax star in 2017. The airline is a member of the oneworld alliance that operates more than 14,000 daily flights to some 1,000 destinations in more than 150 countries. For more information, please visit http://grupo.iberia.es