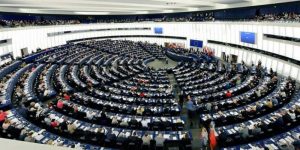 Adopted during a plenary session the same day, the report reaffirms the EP’s backing for Taiwan’s meaningful engagement in international bodies including the International Civil Aviation Organization and the World Health Organization. It also reiterates support for a Taiwan-EU bilateral investment agreement.

Pointing out the contrasting political developments in Taiwan and China, with a multiparty democracy on one side of the strait and an increasingly authoritarian regime on the other, the report also calls on the EU and its member states to do their upmost in urging Beijing to refrain from further military provocation toward Taiwan and endangering regional peace and stability.

The EP also voiced concern over China’s unilateral decision to start using new flight routes in the Taiwan Strait. All cross-strait disputes should be settled by peaceful means on the basis of international law, the report stated, adding that it encourages the resumption of official dialogue between Taipei and Beijing.

As a responsible member of the global community, Taiwan will continue to uphold regional security and stability, and fulfill its international responsibilities through close cooperation with like-minded countries, the Office of the President said in a statement released on September 13.