Experience Viennese charm at the Palais Hansen Kempinski: from apple strudels to the waltz king 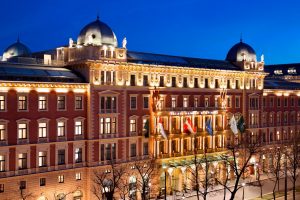 Vienna, October 2017 – Vienna is absolutely worth a trip. A particularly charming time of year to visit the Austrian capital city is in the winter – when the Christmas markets, the New Year’s Eve Trail and the famous ball season offer the chance to enjoy the cold winter months as a true Viennese local. Also typically Viennese is the five-star-superior hotel Palais Hansen Kempinski; a listed historic building located on the magnificent Ringstraße. The hotel seamlessly combines its rich history with a modern design, and offers an excellent starting point for a tour of wintry Vienna.

Some of the attractions drawing visitors to the Austrian capital in November and December are the countless Christmas markets filled with arts, crafts and Christmas goodies such as Lebkuchen (a baked Christmas treat similar to gingerbread) und Punsch (Christmas punch), as well as the world-famous coffee culture. The Palais Hansen’s grandiose Lobby Lounge is one of the most beautiful hotel lobbies in the city; here you can warm yourself up with a Viennese specialty coffee Melange upon arrival, to be enjoyed alongside a typical Viennese pastry. A small bell is sounded several times a day when warm apple strudels, freshly baked according to the secret recipe of head pastry chef Georg Hölbl, are brought out for guests to enjoy in the lobby. 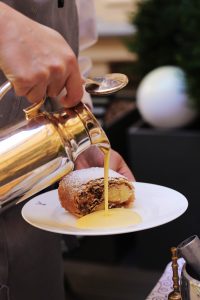 Art, culture and cuisine in the imperial city
As a particularly romantic option in the pre-Christmas season, Palais Hansen Kempinski also offers its guests the option of a city tour in a traditional Fiaker – otherwise known as a horse-drawn carriage. The coachman picks up his guests from right outside the hotel and takes them on a tour through the city, sharing fascinating anecdotes about Vienna that are not to be found in any guidebook. A further, essential component of your visit to the city of Vienna is of course the cuisine – and this doesn’t just mean Viennese Schnitzel, Tafelspitz (a traditional boiled beef dish) and the typical sweet treats from patisseries. Modern cuisine has produced many excellent restaurants, one of these being the Michelin-starred restaurant Edvard at the Palais Hansen Kempinski, which blends classical regional and seasonal dishes with top international cuisine. Chef de Cuisine, Norman Etzold and his team offer a wide range of culinary possibilities at the Palais Hansen – from the award-winning gourmet restaurant to culinary events at the restaurant ‘Die Küche’. In addition to this, you have the possibility of trying the hearty signature dish in the Lobby Lounge: Käsekrainer, a cheese-filled sausage accompanied by horseradish, mustard and bread. 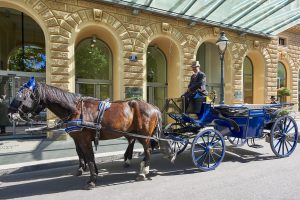 A waltzing start to the New Year
Vienna is world-famous for its rich musical heritage and countless composers who chose the Danube metropolis as their home and workplace. The annual highlight for classical music lovers is the city’s New Year’s Concert, which is broadcast live in 90 countries. January is also the start of the ball season with 450 dance events taking place across the city. The Vienna Opera Ball has also become world famous, attended yearly by international guests and celebrities. General Manager of the Palais Hansen Kempinski, Gerhard Mitrovits, has also played his part in making the tradition of the Vienna ball known around the world. He has already set up nine balls in various cities, including Beijing, Moscow, New York and Jakarta.

Cosiness and relaxation
Austria is a relaxed place, therefore after an eventful day out and about in Vienna, you are very much entitled to sit back and relax. The city’s thermal baths and spas invite you to do just this – including the Kempinski The Spa, with its saunas, hydropool and gym. The treatments are inspired by the seasons and are designed to fully restore the body’s natural balance.

Since April, a true cosmopolitan, Gerhard Mitrovits, has been the man heading the Palais Hansen Kempinski. The born-and-bred Austrian has been managing hotels in almost every continent for decades and brings extensive experience and new ideas to the hotel on the magnificent Ringstraße. “There is hardly a more exciting address in Vienna, which is modern and traditional at the same time. A contemporary top-class hotel in a historic building, and in addition award-winning cuisine, and a fantastic, young team”, sums up General Manager Gerhard Mitrovits.

About Palais Hansen Kempinski Vienna
Housed in a heritage-listed Palais on Schottenring Street, Palais Hansen Kempinski Vienna forms part of the famously glamourous Ringstrasse boulevard. Sights like the Burgtheater, St. Stephen’s Cathedral, the Parliament building or the Rathausplatz square are only a few minutes’ walk away. The Renaissance Revival architecture combined with innovative touches like iPad check-in and an iPad version of the traditional hotel information covering everything from room service to outdoor activities create a symbiosis of Viennese tradition and present-day zeitgeist. The charming palais accommodates 152 rooms and suites, two restaurants, one bar, a cigar lounge, six function rooms, a ballroom, a florist, a fitness and spa area, also open to day spa guests, as well as 17 private residential penthouse apartments on a total of seven stories. 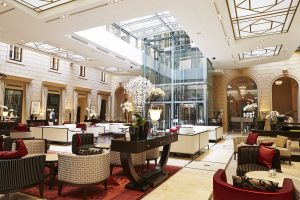 About Kempinski Hotels
Created in 1897, Kempinski Hotels is Europe’s oldest luxury hotel group. Kempinski’s rich heritage of impeccable personal service and superb hospitality is complemented by the exclusivity and individuality of its properties. Kempinski now manages a portfolio of 76 five-star hotels and residences in 31 countries and continues to add new properties in Europe, the Middle East, Africa, Asia and The Americas. Each property reflects the strength and success of the Kempinski brand without losing sight of its heritage. The portfolio comprises historic landmark properties, award-winning urban lifestyle hotels, outstanding resorts, and prestigious residences. Each one is imbued with the quality guests have come to expect from Kempinski while embracing the cultural traditions of its location. Kempinski is a founding member of the Global Hotel Alliance (GHA), the world’s largest alliance of independent hotel brands.