Everything you wanted to know about bats in Postojna Cave Park 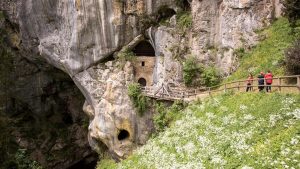 The Cave under Predjama Castle located in Postojna Cave Park is home to numerous bats, which are connected with many stories and myths and often considered as flying mice that come from hell, feed on blood and get tangled in people’s hair… But is it really so? Read why it’s worth visiting the Postojna Cave Park in the summertime! And check out their new webpage!

Postojna Cave Park is one of the most popular attractions in Slovenia. Here, we reveal why it’s worth visiting in the summertime. Fun for a whole family is guaranteed! Check out their new webpage and enter the fairytale world.

In summer months, after the bats’ hibernation period, during which the cave is completely closed to the public, visitors can finally get inside the bats’ home and get to know these animal nightlife lovers from up-close. According to the most recent monitoring data, the Cave under Predjama Castle is inhabited by fourteen different bat species. One of the most interesting ones is without doubt the lesser horseshoe bat, which weighs only as much as a sheet of paper.

A lightweight bat – a badass creature

The Slovenian Association for Bat Research and Conservation declared 2018 the year of the lesser horseshoe bats. The bat is the smallest of the horseshoe bat family and one of the world’s lightest bats. During the summer, you will get to see the bats flying above the Predjama Castle soon after sunset and, while touring the cave, you will find them hanging upside down from the ceiling. As for their appearance, the lesser horseshoe bats have a distinctive flattened horseshoe-shaped nose, triangular ears with a pointed tip, and wide, extremely short wings, which they use to wrap around their bodies while hanging from the ceiling. They have a body length of 4.5 cm, a three-cm-long tail and a wingspan of up to 20 cm. They feed on nocturnal butterflies and other flying insects. And another fascinating feature is their communication by means of echoes.

Lesser horseshoe bats have extremely good eyesight, but they also have a special communication system that works like a sonar. They emit ultrasound calls inaudible to people, which return from the walls and are then used by the bats to create a very accurate picture of the environment or the position of their prey – this is called echolocation. This allows the lesser horseshoe bats to detect even a thread as thin as 0.05 millimetres. If you would like to hear their inaudible sounds, you can listen to bats using the so-called ultrasonic detector, which converts ultrasound calls into sounds that can be detected by the human ear.

In the second longest Slovenian show cave spanning four floors, you can see as many as six endangered bat speciesamong other things. In addition to the greater mouse-eared bat, the long-fingered bat, the barbastelle, and the common bent-wing bat, there are two other bats included in the Red List of Threatened Species, namely the greater horseshoe bat and the lesser horseshoe bat. Nevertheless, we are very pleased to announce that the lesser horseshoe bat population in the Postojna Cave Park is growing steadily. This year, our lesser horseshoe bats number 368, i.e. twice as many as at the count eight years ago. According to Primož Presetnik of the Centre for Cartography of Fauna and Flora “low mortality is mostly a result of favourable conditions, and there is no doubt that the Cave under Predjama Castle boasts such conditions.” In the Postojna Cave Park, we are very consistent in maintaining the peace and quiet inside the cave, making sure the bats are not disturbed during the hibernation period.

Although the media have contributed to the bats carrying a rather negative connotation, early Chinese cultures regarded them as a symbol of happiness that brings health, longevity, well-being and love. The Maya saw them as a symbol of initiation, rebirth and protection against evil. In pre-Christian Europe, bats symbolized contact with other worlds, and supposedly also increased sexual stamina. We have checked with the Centre for Cartography of Fauna and Flora, if there are any bats that feed on blood in either Slovenia or Europe – the answer is no, so there is nothing to fear during a visit to the Cave under Predjama Castle.