Europe is standing with Taiwan in defending freedom: EP delegation 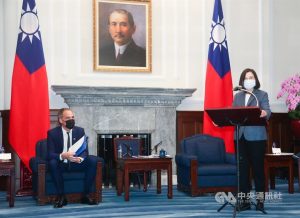 Taipei, Nov. 4 (CNA) The head of the first-ever official European Parliament (EP) delegation to come to Taiwan told President Tsai Ing-wen (蔡英文) on Thursday that the visit is meant to send a clear message that Europe is standing by Taiwan in the defense of freedom.

“This is the first official visit from a delegation of European Parliament to Taiwan. This is to ensure how important the Taiwanese democracy is for the European citizens we are representing,” Raphaël Glucksmann told Tsai during their meeting in the Presidential Office.

Glucksmann continued to say that Taiwan is the most “vivid, enlightening” democracy in the Indo-Pacific region and “a treasure that all democrats around the world should cherish and protect.”

“We came here with a very simple and clear message: You are not alone. Europe is standing with you, by you, in the defense of freedom, rule of law,” he said.

Glucksmann is the head of the 13-member delegation, which arrived in Taiwan Wednesday morning. It comprises members of the EP’s Special Committee on Foreign Interference in all Democratic Processes in the European Union, including Disinformation (INGE).

During the delegation’s three-day visit, its members will discuss topics including disinformation and cyberattacks with local government officials, experts, and representatives from non-governmental organizations.

Glucksmann pointed out that his delegation represents various political groups which have differences with each other on a number of issues, but all of them have united together for the trip to show support for Taiwan.

The delegation is visiting Taiwan to learn about its capacity to build a strong democracy while confronting a high level of threats from China, he added.

As Europe is also facing large scale actions orchestrated by an authoritarian regime to weaken its democracy, the parliamentarian said, the delegation has come to learn from Taiwan’s experience in dealing with this kind of threat and see what tactics can be applied at home.

For her part, President Tsai welcomed the historic visit made by the EP delegation and said that Taiwan is hoping to establish a “democratic alliance against disinformation” as the challenge is a global one.

“Taiwan is also willing to share its experience in combating disinformation with our European friends. This will deepen our partnership and help safeguard the free and democratic way of life we enjoy,” she said.

The delegation is scheduled to stay in Taiwan until Friday.