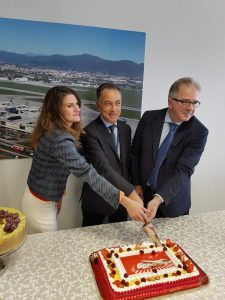 Coming just months after adding Ukraine as its 36th country market, Milan Bergamo will be welcoming Ernest Airlines’ link to Lviv on 20 October, quickly expanding the airport’s connections to the Eastern European country. Adding two Ukrainian destinations with its latest airline partner – a twice-weekly service to Kiev Zhulyany will be launched on 9 December – the Italian airport will offer over 14,000 one-way seats to Ukraine during W17/18.

Initially launching a twice-weekly (Fridays and Sundays) service to the western Ukrainian city, Ernest has already confirmed it will add a third flight (Tuesdays) from December. Having only joined the airport earlier this summer, the Italian low-cost carrier will see the addition of its third destination from Milan Bergamo by the end of the year, resulting in the airline basing its first aircraft at the Milanese gateway.

“Thanks to our work with both Ernest Airlines and Ukraine International Airlines we’ve seen significant development in our connections to Ukraine this year,” explains Giacomo Cattaneo, Director of Aviation, SACBO. “There’s obvious demand for these connections. With strong industry and trade between the two countries it’s important to us to continue to grow the market with both partners, ensuring variety and connectivity for all our passengers,” adds Cattaneo.