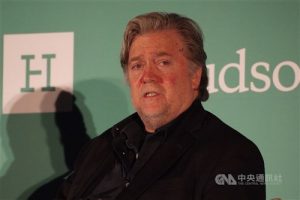 Bannon, a figure associated with America’s far-right, promoted hawkish policies against China during his seven months in the Trump administration, and has more recently joined fugitive Chinese billionaire Guo Wengui (郭文貴) in a series of broadcasts attacking China’s political leadership.

In a pre-recorded video address to a forum on Taiwan-Japan relations, organized by the conservative Formosa Republican Association in Taipei, Bannon said that Taiwan’s elections, along with the recent pro-democracy protests in Hong Kong, played a vital role in thwarting China’s quest for global dominance.

He accused the Chinese government of “enslaving” its people and aggressively expanding its power under the guise of the “One Belt, One Road” initiative and the telecoms company Huawei.

In light of this threat, Bannon said the Trump administration had sought to “confront China on multiple fronts,” including the West Pacific and the South China Sea.

“This is why January’s election, particularly the reelection of President Tsai Ing-wen (蔡英文), is so important,” he said, arguing that Tsai “represents the banner of freedom…and self-determination.”

Placing Taiwan in the context of a larger conflict between China and the West, Bannon argued that Taiwan’s upcoming elections are “the single most important event we have in front of us.”

“As goes Taiwan, so goes Asia. And as goes Asia, so goes the rest of the world,” he said.

At the end of his remarks, Bannon explained that he had been prevented from traveling to Taiwan by the ongoing impeachment proceedings against President Trump, but added that he hoped to visit in the weeks after the election.

“I look forward to coming over in January and celebrating,” he said.