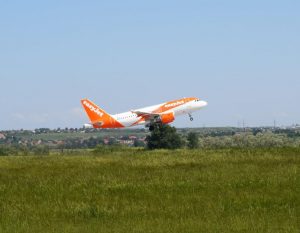 Photo caption: easyJet confirms the introduction of London Southend and Manchester to its network from Budapest Airport. Launching on 2 and 5 November respectively, the airline will bolster the Hungarian gateway’s links to the UK this winter.

Following on from the recent announcement of Wizz Air’s expansion to the UK with a link to Doncaster Sheffield, plus LOT Polish Airlines confirming it will serve London City, Budapest Airport will further enhance capacity to the nation this winter as easyJet confirms it will introduce London Southend and Manchester to its Hungarian network. Launching on 2 and 5 November respectively, with both seeing twice-weekly departures on Mondays and Fridays, the airline is bolstering its existing UK service to London Gatwick.

As a direct result of Europe’s second largest low-cost-carrier’s (LCC) latest commitment to Budapest, weekly capacity to Manchester will be enhanced by 20% this winter, with the airline’s planned twice-weekly service complementing the existing operations flown by Ryanair and Jet2.com. easyJet’s new Southend route offers passengers even more choice when flying to London’s newest airport, with the LCC’s link adding to Flybe’s existing Tuesdays, Thursdays and Saturdays schedule.

Overall this winter Budapest will be connected to 15 destinations across the UK, with this latest announcement by easyJet further confirming it as the capital city airport’s largest international market with passenger numbers reached over 2.15 million passengers in 2017, up 6.1% versus 2016.

“It is great that easyJet is enhancing its Budapest network and tripling its route count to the UK with these routes to London Southend and Manchester, highlighting how important the UK market is for Hungarian passengers as well as the popularity of Budapest as a European city break for British nationals,” comments Balázs Bogáts, Head of Airline Development, Budapest Airport. “This expansion by easyJet means that this winter it will offer 10 routes from Budapest to destinations across the UK, France, Germany, Netherlands and Switzerland.”