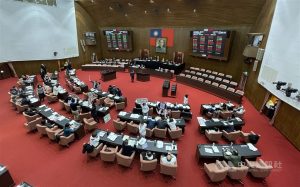 The Legislative Yuan’s last day of reviewing the government’s 2021 budget on Jan. 29.

Taipei, Feb. 3 (CNA) Taiwan has jumped 20 places in the 2020 Democracy Index rankings to 11th position globally from 31st in 2019, to rank top in Asia, according to the index report released Tuesday by the Economist Intelligence Unit (EIU).

Describing Taiwan as a beacon of democracy in Asia, the report said that the country’s spectacular rise reflects a consolidation of positive political and legal development in recent years.

“The transparency of the financing of political parties has improved and legislative reforms have more explicitly affirmed the judiciary’s independence from government influence,” according to the report.

The EIU began compiling the Democracy Index in 2006 and the main focus of the 2020 report is the impact of the coronavirus (COVID-19) pandemic on democracy and freedom around the world.

The global average score in the 2020 Democracy Index hit an all-time low, falling from 5.44 in 2019 to 5.37. This is by far the worst global score since the index was first produced in 2006, according to the report.

In 2020, a large majority of countries — 116 of a total of 167 polled — recorded a decline in their total scores compared with the previous year. Only 38 recorded an improvement, the report said, noting that the star performer in this year’s index is Taiwan, which was upgraded from a “flawed democracy” to a “full democracy.”

Based on its scores on a range of indicators, each country is then itself classified as one of four types of regime: “full democracy;” “flawed democracy;” “hybrid regime,” or “authoritarian regime.”.

According to the EIU’s measure of democracy, only about 49.4 percent of the world’s population live in a democracy of some sort, and just 8.4 percent reside in a “full democracy.”

More than one-third — 35.6 percent of the world’s population — live under authoritarian rule, with a large share being in China, the report revealed.

The top five places in the global democracy rankings were occupied by Norway, Iceland, Sweden, New Zealand and Canada.

Taiwan, Japan and South Korea took the top three spots in Asia, moving from the “flawed democracy” category to be classified as “full democracies.”

(By Chen Yi-wei and Evelyn Kao)