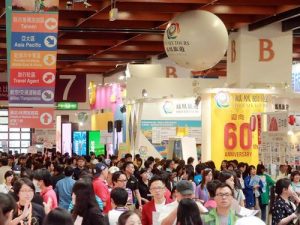 Taipei, Aug. 23 (CNA) This is the first time in 12 years that the Cross-Strait Taipei Travel Fair will not take place in conjunction with the annual Taipei International Travel Fair due to planning delays, according to the Taiwan Visitors Association (TVA) on Monday.

Since 2006, the Taipei International Travel Fair, which takes place from Oct. 27-30 this year, has designated a section of the trade show the “Cross-Strait Taipei Travel Fair.”

However, TVA Secretary General Wu Chao-yen (吳朝彥) explained to the press that a delay in scheduling and planning has made such an arrangement impossible this year.

The association sent an invitation to China in February or March, he noted, but the first joint planning meeting was not held until July. Even then, the two sides had been unable to reach consensus on the fair by mid-August, at which point it was decided there was insufficient time to meet the October deadline.

Wu mentioned that despite the absence of the Cross-Strait Taipei Travel Fair this year, the association will continue to work with China so cross-strait events will still be a feature of future fairs.

The four-day Taipei International Travel Fair, which in 2016 attracted 950 exhibitors from more than 60 countries, is expected to attract a similar number of participants, according to the TVA.