China never renounced use of force against Taiwan: MAC 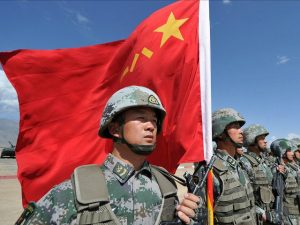 Taipei, Aug. 18 (CNA) China has never renounced the use of force against Taiwan, which is a “fact” rather than an “assumption,” Taiwan’s Mainland Affairs Council (MAC) said Saturday.

Beijing never stopped its deployment of missiles targeting Taiwan, and continues to increase the frequency of military exercises near the Taiwan Strait, actions that have escalated regional tensions and caused anxiety in the international community, MAC said.

It is also a fact, not an assumption, that China has never given up the option of using force against Taiwan, MAC said, in the wake of Beijing’s denial Friday that it was probably preparing for an offensive against the United States and U.S. allies.

China’s Foreign Ministry spokesman Wu Qian (吳謙) on Friday rejected a U.S. military report that said Beijing was “likely training for strikes” against the United States and its allies.

In the wake of that statement, MAC said Taiwan has the ability to defend itself and will not give way to coercion or intimidation.

The Taiwan government will continue to seek cooperation with countries such as the U.S. to jointly safeguard peace and stability in the Taiwan Strait and the rest of the region, MAC said.

Beijing should not underestimate Taiwan’s will and determination to safeguard its democracy and sovereignty, MAC said, adding that Taiwan will never succumb to China’s suppression.

It also called on China to respect the will of the 23 million people of Taiwan, their choice of freedom, and way of life.