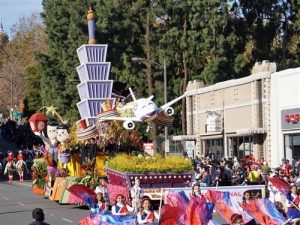 Los Angeles, Jan. 1 (CNA) China Airlines (CAL), one of Taiwan’s two leading carriers, won the 2020 International Award at the New Year’s Day Rose Parade with a float based on the theme of “Dreams of Flying, Wings of Hope.”

It was the 23rd time that CAL has won the international award for most outstanding float from outside the United States and the 29th award since it began participating in 1987 in the event held annually in Pasadena, California.

In line with this year’s theme of “The Power of Hope,” the CAL float, decorated with over 20,000 fresh flowers, plants and seeds of 41 species, centered around a music box to feature Taiwan’s diverse cultural and natural landscapes.

Float designer John Ramirez, whose wife is from Taiwan, said it was a great honor for him to design the float.

Ramirez said he was hugely inspired by Taiwan’s culture when it came to the float’s decoration and added that this is why a miniature of the 101 Tower, a spinning top, beef noodles, xiaolongbao, the Formosan bear and the Formosan magpie were displayed on the float.

As his wife’s family members live in Taipei and Tainan, Ramirez said they go back to Taiwan to visit every year and he described Taipei as a very beautiful and futuristic city.

Abraham Chu (朱文祥), director-general of the Taipei Economic and Cultural Office in Los Angeles, said 2019 was a year full of challenges but that Taiwan will always dream high.

“This is the message that we wanted to deliver to the public,” he said.