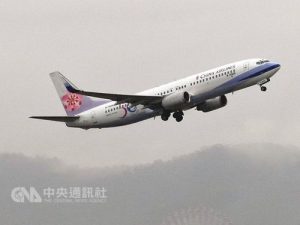 The destination airport this time will be Gatwick.

In addition to British cuisine and shopping stalls, CAL will offer 500 limited “fortune parcels” at a price of NT$1,499 each at the fair.

Each parcel will include a lottery ticket for prizes ranging from NT$3,000 (US$99)-worth of airline ticket coupons to two round-trip Taipei-London flight tickets, according to the company.