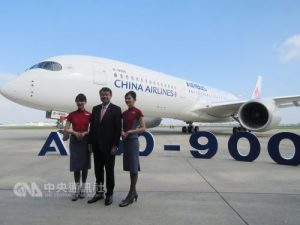 Toulouse, France, Oct. 22 (CNA) China Airlines (CAL), one of the leading international carriers in Taiwan, said Monday that it is thinking of buying another six extra wide-body A350 aircraft as part of its plan to expand its global transportation network.

CAL Chairman Ho Nuan-hsuan (何煖軒) told the press in Toulouse that his company is studying the possibility of purchasing the long haul A350-900 XWBs or the bigger A350-1000 XWBs and will make a decision later this year or next year.

Ho made the comment on the sidelines of a ceremony at which CAL took the delivery of an A300-900 XWB, the latest addition to its fleet of 13 Airbus aircraft of that model.

He said either the A300-900 or the A300-1000 would be a good choice at a time of rising fuel costs resulting from a spike in international crude oil prices.

According to CAL, the A350 XWB is manufactured by means of the most advanced technology and is a lighter and safer model because of its high-end production materials.

In addition, the aircraft model is eco-friendly, which means it can cut carbon dioxide emissions by 25 percent and lower maintenance costs, CAL said.

CAL said it is the fourth largest buyer of the A350 XWB series and that it is listed by Airbus as a customer that is likely to purchase more aircraft in that series.

As part of Airbus’ promotion of the A300-1000, it flew the aircraft to Taipei in January on a demonstration tour across the Asia-Pacific and Middle East regions.