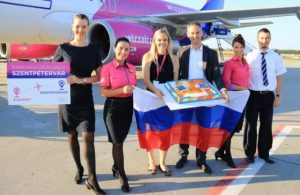 Celebrating the resumption of a direct link to St. Petersburg, Budapest Airport welcomed Wizz Air’s twice-weekly service which commenced on 27 August. With its new link to the Russian port city, Wizz Air now offers 245 weekly flights from Budapest and close to 4.5 million seats in total from Hungary’s capital city throughout the year.

As part of Budapest Airport’s strategy to further develop its route network to the east, the Hungarian gateway launched its second link to Russia when it celebrated Wizz Air’s new service to St. Petersburg. Last flown in 2014, the ultra-low-cost carrier’s (ULCC) resumption of the highly demanded link will see Russia become Budapest’s 12th largest country market served. With an overall potential market for the direct link expected to be 30,000 passengers, the ULCC will launch the route as a twice-weekly service to Russia’s second largest city. The start of W17/18 will see the frequency increase to three times weekly, with an additional service to be added by S18, resulting in the route being operated Sundays, Mondays, Wednesdays and Fridays. Serving both business travellers and tourists alike the link will remove the need to connect via other Eastern hubs.