BAVARIA is where I want to go 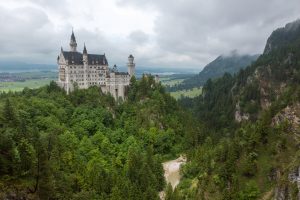 With ‘big city’ flair and idyllic countryside, the fascination of the Middle Ages and the beauty of the Alps, Bavaria offers a range of attractions that makes it Germany’s most popular vacation destination.

1. Neuschwanstein Castle
It’s kitsch, it’s over the top, it’s absolutely stunning and a must-see. Walking up the steep hill to Schloss Neuschwanstein can take your breath away, but the view of this fairytale castle looking down on the village of Füssen will leave you at a loss for words for more than one reason. King Ludwig II asked his architects to build an idealized version of a medieval knight’s castle. The result is ‘castle romanticism’ at its best. Originally intended as his own private retreat, Ludwig II’s castle was opened to the public only a few weeks after the King’s death in 1886. Each year approximately one million people are drawn to this distinctive, mesmerizing palace. 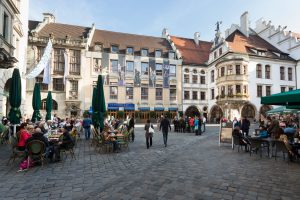 2. On Top of the World: The Zugspitze

The Zugspitze is Germany’s highest mountain at 9,717 ft. Hiking is possible, but there are also mountain railways and cable cars for an easier ascent. From the summit, one can see more than 400 mountain peaks. At the nearby Alpspitze with its awe-inspiring AlpspiX viewing platform, visitors have spectacular views over the southern Bavarian Alps.

For those who love shopping, Munich offers many choices, with its Kaufinger Strasse or the Viktualienmarkt, a colorful market of fruit, vegetables, and fish stalls. Cultural highlights are the world-famous ‘Glockenspiel’ (Clock) at Marienplatz and the large state-run art galleries and museums. The Neue and Alte Pinakothek, the Pinakothek der Moderne, the Museum Brandhorst, the Lenbachhaus Gallery, and the State Museum of Egyptian Art are all considered some of the most important museums in the world. Also notable are the opulent opera house ‘Bayerische Staatsoper’ and the very popular BMW Welt next to the BMW Museum and car factory. The new Nazi Documentation Centre, opened May 2015, chronicles the history of National Socialism in Bavaria, shown through documents and visuals, rather than artifacts.

4. Music is in the Air: Festivals in Bavaria

Many events and festivals take place in Bavaria throughout the year, catering to all tastes. Rock music lovers will enjoy ‘Rock im Park’ in Nuremberg or the ‘Taubertal Open-Air Festival’ in Rothenburg. Other important festivals include International Jazz Week in Burghausen and the International Festival for New Music Theater in Munich. Annual classical events are the Mozart Festival in Augsburg and the famous Richard Wagner Festival in Bayreuth. Oktoberfest is celebrated yearlong at the many beer gardens in Munich.

Seven World Heritage sites can be admired in the state of Bavaria. In 2012, the Margravial Opera House in Bayreuth was added to the list of sites most worthy of protection. This magnificent edifice in the center of Bayreuth is one of the last and most beautiful baroque theaters in the world that is still in its original form. Equally beautiful are the Würzburg ‘Residenz’ (a prestigious baroque palace) and the pilgrimage Church of Wies in Pfaffenwinkel (a rococo gem with a gorgeous interior). The old towns of Regensburg and Bamberg with their medieval architecture, as well as the prehistoric pile-dwelling in the Alps and the Upper Germanic Raetian Limes, the second longest man-made structure in the world, are also part of the state’s World Heritage wonders. 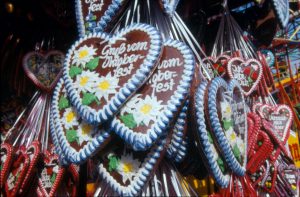 Bavarian cuisine is famous around the world: pretzels with ‘Obatzda’ (typical Bavarian cheese), aromatic dishes with dumplings, numerous kinds of fish and meat dishes and, of course, regional sausages. Try white sausage in Munich, ‘Rostbratwurst’ in Nuremberg, and ‘Knacker’ in Regensburg. A national pastime, Bavarian people enjoy good food with their family and friends in local taverns or under the shadows of linden trees in the beer gardens. Wines from Franconia, traditionally served in ‘Bocksbeutel’ bottles, or any of 4,000 different beers from the more than 600 breweries in Bavaria are served as well.

People in Bavaria are loathe to pass up an opportunity to celebrate and make music. Be it summer or winter, traditional festivals abound such as the dance into May around the maypoles, ‘Viehscheid’ transhumance or the ‘Leonhardiritt’ horse procession.  These celebrations – with food, beer, wine, traditional clothes, music and dances – are an important part of Bavarian culture and help to create the gregarious and joyous attitude that prevails in the Free State of Bavaria. 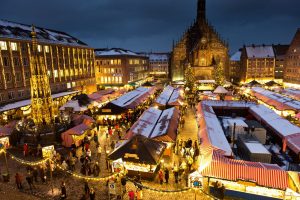 In Bavaria, Christmas markets are a key part of pre-Christmas preparations. At the traditional markets, visitors can admire handicrafts, listen to festive music and enjoy regional delicacies in a cozy atmosphere. The oldest and most famous Christmas Market is the Nuremberg ‘Christkindlesmarkt’. In the wooden huts of the ‘town made of wood and cloth’ you can find traditional, handcrafted Christmas jewelery, along with sweet and hearty treats such as the famous Nuremberg ‘Lebkuchen’ biscuits or ‘Rostbratwurst’ sausages. The Nuremberg ‘Christkindlesmarkt’, together with the churches and museums of Nuremberg, invite visitors to attend festive concerts, tours and exhibitions in the pre-Christmas period.

9. Travel along the Romantic Road

One of Germany’s most beautiful tourist routes, the Romantic Road, a 410km (255 mile) route which runs through scenic rural Bavaria, is dotted with pretty towns, many with half-timbered houses, and some with their medieval walls still surrounding them. Enjoy sites such as the famous residential palace in Würzburg and the medieval town of Rothenburg ob der Tauber (be sure to take the night watchman’s tour), Füssen (located on the edge of the Alps, close to Neuschwanstein Castle) along this former trade route, established during the Middle Ages. The Romantic Road can be travelled by car, bicycle or train, or via ‘Romantic Road’ busses which link most towns and cities.

Bavaria is not only a paradise for outdoor activities, nature experiences and skiing, but also a competitive vacation choice with excellent value for the dollar. Several Bavarian destinations such as Ruhpolding and Oberstaufen, Nuremberg and Augsburg, also feature special visitor attraction cards offering the chance to enjoy spectacular mountain scenery and a range of add-on attractions and services at no extra charge. Low-cost airlines, an efficient and service-oriented airport in Munich, affordable public transportation, and well-priced accommodations, food and beverage, make Bavaria a wonderful destination to visit.