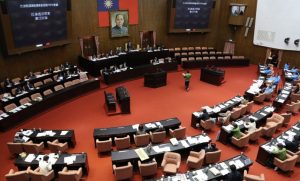 The Anti-Infiltration Act is passed by the Legislature Dec. 31 in Taipei City. (CNA)

The Anti-Infiltration Act was passed by the Legislature Dec. 31, 2019, underscoring the commitment of the government to safeguarding national security and Taiwan’s democracy.

Described as an effective democratic defense mechanism by the Ministry of the Interior, the legislation complements existing regulations governing lobbying, political donations, and presidential, vice presidential and civil servant elections and recalls.

It prohibits intervention in Taiwan’s democratic political system through infiltration sources—namely, individuals, institutions or organizations affiliated with or sponsored by a government, political party or other political group of a foreign hostile force, the MOI added.

A hostile foreign force is defined under the act as a country or political entity at war or engaging in a military standoff with Taiwan, including but not limited to China.

Any individual or organization in Taiwan receiving instructions or financial support from a hostile foreign force to influence elections, launch a public referendum or make political donations, among other political activities, are subject to imprisonment of between three and five years, the MOI said.

In a statement released later the same day, the Cabinet-level Mainland Affairs Council backed the legislation and said it would help maintain orderly, stable and transparent cross-strait exchanges.

According to the MAC, China’s infiltration campaign is posing a serious threat to Taiwan’s national security, democracy and social order.

The act was drafted on the basis of extensive discussions between the executive and legislative branches, as well as public opinion, the MAC said. Core values of freedom and democracy are at the heart of the legislation, and it will in no way target any specific group or impact regular cross-strait exchanges, the MAC added.

This position was echoed by President Tsai Ing-wen during her New Year’s Day address. The act will not infringe upon human rights, but better protect Taiwan’s freedom and democracy, she said.

The government is opposed to infiltration, but not cross-strait exchanges, Tsai said. The legislation will not affect normal areas of interaction such as business, education, religious and tourism exchanges, she added. (SFC-E)

Write to Taiwan Today at ttonline@mofa.gov.tw