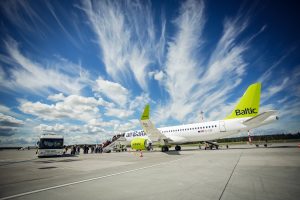 Martin Gauss, Chief Executive Officer of airBaltic: “Our customers can rely on a punctual service. In 2017, airBaltic had one of the busiest years ever, significantly increasing the number of flights performed and carrying record high volumes of passengers. We are proud that we still managed to reach our punctuality targets and offer more punctual service to our passengers than other carriers.”

According to OAG, airBaltic achieved a punctuality rating of 90.01% for flights linking the Baltics to its network spanning Europe, Scandinavia, CIS and the Middle Least. It means that more than 90 out of 100 airBaltic flights arrived on time in 2017. Besides airBaltic, there are only two other European airline ranked in the global Top 10.

John Grant, Senior Analyst at OAG, says: “OAG is delighted that airBaltic has once again been recognized as the most punctual airline in our yearly awards based upon over 57 million individual flights tracked through the course of 2017. To consistently achieve such a level of punctuality, especially when accepting a new modern aircraft such as the C series into the fleet reflects on both the professionalism and dedication of airBaltic team and provides customers with the levels of service expected from all airlines.”

airBaltic serves over 60 destinations from its home base in Riga, Latvia. From every one of these locations, airBaltic offers convenient connections via Riga to its network spanning Europe, Scandinavia, CIS and the Middle East. In addition, airBaltic also offers direct flights from Tallinn and Vilnius.

airBaltic (AIR BALTIC CORPORATION) is the world’s most punctual airlines connecting the Baltic region with 60 destinations in Europe, the Middle East, and the CIS. airBaltic is a joint stock company that was established in 1995. Its primary shareholder is the Latvian state, which holds 80.05% of the stock, while Lars Thuesen holds around 20% through his fully-owned Aircraft Leasing 1 SIA. The airBaltic fleet consists of 30 aircraft – 7 Bombardier CS300, 11 Boeing 737 and 12 Bombardier Q400Next Gen. airBaltic has received numerous international awards for excellence, innovative services, and achievements in reshaping its business. In 2012, airBaltic was ranked by Airlinetrends among the Top 10 airlines globally for innovations. airBaltic achieved the best on-time performance globally for three years running in 2014, 2015 and 2017.