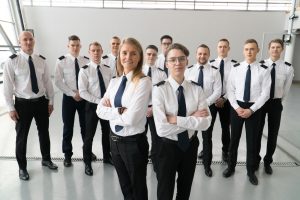 Riga. Already the third group of students began their study process at the Latvian airline’s airBaltic Pilot Academy on January 10, 2019. The third group of 11 students will become airBaltic pilots upon completion of the full-time programme in less than two years from now. 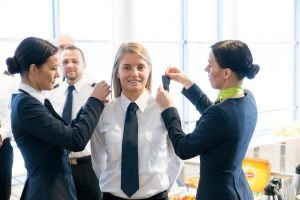 Pauls Cālītis, airBaltic SVP Flight Operations: “The students that received their first epaulettes today have passed the same meticulous application process all our pilots go through. Being the only pilot academy in the Baltic region that is linked to an airline, our students benefit greatly while learning from the first-hand experience of our professional instructors.”

“We launched our Pilot Academy last spring, and since then we have received four state-of-the-art Diamond Aircraft and a flight simulator, established training facilities at Liepāja Airport. Over 30 Baltic students are now on their way to fulfill their dreams and become commercial pilots,” P. Cālītis added.

The application process for the second 2019 spring group of airBaltic Pilot Academy will conclude on January 14, 2019. For more information and applications, please visit: http://pilotacademy.com.

airBaltic serves over 70 destinations from Riga, Tallinn and Vilnius, offering the largest variety of destinations and convenient connections via Riga to its network spanning Europe, Scandinavia, the CIS and the Middle East. For summer 2019, airBaltic will launch new direct routes from Riga to Dublin, Stuttgart and Lviv. In addition, next summer airBaltic has introduced three new destinations from Tallinn to Malaga, Brussels and Copenhagen.

airBaltic (AIR BALTIC CORPORATION) is the most punctual airline in Europe connecting the Baltic region with over 70 destinations in Europe, the Middle East, and the CIS. airBaltic is a joint stock company that was established in 1995. Its primary shareholder is the Latvian state, which holds 80.05% of the stock, while Lars Thuesen holds around 20% through his fully-owned Aircraft Leasing 1 SIA. The airBaltic fleet consists of 34 aircraft – 14 Airbus A220-300s, 8 Boeing 737s and 12 Bombardier Q400Next Gen aircraft. airBaltic has received numerous international awards for excellence, innovative services, and achievements in reshaping its business. In 2017, the airline received the CAPA Regional Airline of the Year awards, while in 2018 airBaltic received the ATW Airline Industry Achievement Award as the Market Leader of the Year. airBaltic achieved the best on-time performance globally in 2014, 2015, 2016, 2017.

airBalticTraining, a subsidiary of airBaltic, is a training facility offering a wide range of aviation training services in its modern and purpose-built training centre in Riga, Latvia. It was established in 2010 and since then each year provides training to approximately 3000 professionals from across the world – more than 1 500 pilots, almost 1 000 cabin crew members and several hundred of ground handlers, cargo agents, security personnel and others.