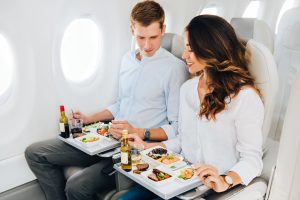 Riga.The Latvian airline airBaltichas seen significant growth in the number of economy passengers choosing among a selection of over 70 fresh meals they have added to their reservation. During the first three quarters of 2018, the sales through different selling points have improved by 45% in comparison to the same period last year.

Zane Pabērza, Inflight Services Manager of airBaltic: “Meal pre-order provides excellent value and we see huge potential in this area, as the customer has a large variety of fresh hot meals, desserts and beverages with many customization opportunities to choose from for a reasonable price.”

“Moreover, ordering is very convenient and flexible for passengers and you can add the meal to the reservation up to 24 hours before departure. When departing Riga, 8 most popular and demanded meal options are available during online check-in and Manage my Bookingtool even up to an hour before departure,” Zane Pabērza added.

The most popular meal pre-order options ordered by airBalticpassengers are teriyaki salmon, grilled pork fillet and cheese omelette. Most popular flights, on which passengers pre-order meals, are flights from Riga to Barcelona, London and Paris. airBalticis continuously working on menu development by providing the best practice of airline catering.

During the first three quarters of 2018, advanced seat reservations have seen an increase in sales by 29%. Most often passengers choose to reserve a window seat. Thanks to the improved overall comfort and larger windows, passengers use the service most often on flights performed by the new Airbus A220-300aircraft. Top destinations, on which passengers reserve seats, are flights to London, Tallinn and Berlin.

airBalticserves over 70 destinations from Riga, Tallinn and Vilnius, offering the largest variety of destinations and convenient connections via Riga to its network spanning Europe, Scandinavia, the CIS and the Middle East. For summer 2019, airBaltichas introduced three new destinations from Tallinn to Malaga, Brussels and Copenhagen. In addition, next summer airBalticwill launch a new direct route connecting Riga and Stuttgart.

airBaltic(AIR BALTIC CORPORATION) is the world’s most punctual airline connecting the Baltic region with 70 destinations in Europe, the Middle East, and the CIS. airBalticis a joint stock company that was established in 1995. Its primary shareholder is the Latvian state, which holds 80.05% of the stock, while Lars Thuesen holds around 20% through his fully-owned Aircraft Leasing 1 SIA. TheairBalticfleet consists of 36 aircraft – 13 Airbus A220-300s, 11 Boeing 737sand 12 Bombardier Q400Next Genaircraft. airBaltichas received numerous international awards for excellence, innovative services, and achievements in reshaping its business. In 2017, the airline received the CAPA Regional Airline of the Year awards, while in 2018 airBalticreceived the ATW Airline Industry Achievement Award as the Market Leader of the Year. airBalticachieved the best on-time performance globally in 2014, 2015, 2016 and 2017.