airBaltic Celebrates 23 Years in the Air 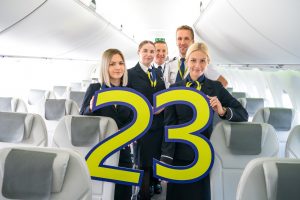 Riga. The Latvian airline airBaltic in October 2018 celebrates its 23rd anniversary since the launch of commercial operations. On October 1, 1995, airBaltic operated its first flight ever from Riga to Stockholm with the aircraft SAAB 340.

Martin Gauss, Chief Executive Officer of airBaltic: “We have played a central role in connecting Baltics to the world, and we are committed to further improve the air connectivity of each of the Baltic states in the future.”

“By 2025, when airBaltic will celebrate its 30th anniversary, we aim to have a single fleet of up to 80 Airbus A220-300 aircraft. When airBaltic began operations, its team consisted of 21 employees. Today, our professional team has grown to 1 500 highly motivated individuals,” Gauss added.

During the past 23 years, airBaltic has carried nearly 40 million passengers and performed over 670 000 flights. In October 1995, airBaltic started operations from Riga to four destinations. Today airBaltic operates direct flights from Riga to over 70 destinations and its fleet has grown to 35 aircraft.

airBaltic serves over 70 destinations from Riga, Tallinn and Vilnius, offering the largest variety of destinations and convenient connections via Riga to its network spanning Europe, Scandinavia, the CIS and the Middle East. For summer 2019, airBaltic has introduced three new destinations from Tallinn to Malaga, Brussels and Copenhagen. In addition, next summer airBaltic will launch a new direct route connecting Riga and Stuttgart.

airBaltic (AIR BALTIC CORPORATION) is the world’s most punctual airline connecting the Baltic region with 70 destinations in Europe, the Middle East, and the CIS. airBaltic is a joint stock company that was established in 1995. Its primary shareholder is the Latvian state, which holds 80.05% of the stock, while Lars Thuesen holds around 20% through his fully-owned Aircraft Leasing 1 SIA. The airBaltic fleet consists of 35 aircraft – 12 Airbus A220-300s, 11 Boeing 737s and 12 Bombardier Q400 NextGen aircraft. airBaltic has received numerous international awards for excellence, innovative services, and achievements in reshaping its business. In 2017, the airline received the CAPA Regional Airline of the Year awards, while in 2018 airBaltic received the ATW Airline Industry Achievement Award as the Market Leader of the Year. airBaltic achieved the best on-time performance globally in 2014, 2015, 2016 and 2017.