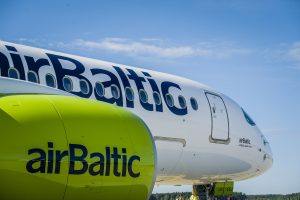 Riga. Latvian airline announces its first destination for the summer season of 2019, which will begin in late March. Next season airBaltic continues to expand its offer in Tallinn, by adding new flights to Malaga, Brussels and Copenhagen starting June 2019. In addtion, airBaltic  will add scheduled flights to Stuttgart from Riga starting March 31, 2019.

Martin Gauss, CEO airBaltic “This year we launched three new destinations from Tallinn to London, Stockholm and Oslo. With another three destinations added in 2019, we will serve a total of 12 direct services out of Tallinn. airBaltic offers the best connectivity to and from the Baltic states in addition to convenient connections via Riga to our network spanning Russia, CIS, Europe and the Middle East.

During the first six months of 2018, airBaltichas transported 1 876 839 passengers or 20% more than in the same period last year to its network spanning Europe, Scandinavia, Russia, CIS and the Middle East.In June 2018, a record high 424 822 passengers travelled with airBaltic.

From Tallinn, airBalticoffers direct flights to Amsterdam, Berlin, London, Paris, Vienna and Vilnius as well as convenient connections via Riga. airBaltic will also launch new direct services from Tallinn to Stockholm and Oslo this autumn. A complete schedule of airBaltic flights and tickets for the new destinations are already available on the company’s homepage at www.airbaltic.com.

airBaltic serves over 70 destinations from Riga, Tallinn and Vilnius, offering the largest variety of destinations and convenient connections via Riga to its network spanning Europe, Scandinavia, the CIS and the Middle East. For summer 2018, airBaltic has introduced eight new destinations from Riga to Malaga, Lisbon, Split, Bordeaux, Gdansk, Almaty as well as Sochi and Kaliningrad. In addition, airBalticlaunched a new direct route connecting Tallinn and London.

airBaltic (AIR BALTIC CORPORATION) is the world’s most punctual airline connecting the Baltic region with 70 destinations in Europe, the Middle East, and the CIS. airBalticis a joint stock company that was established in 1995. Its primary shareholder is the Latvian state, which holds 80.05% of the stock, while Lars Thuesen holds around 20% through his fully-owned Aircraft Leasing 1 SIA. TheairBalticfleet consists of 33 aircraft – 10 Airbus A220-300s, 11 Boeing 737s and 12 Bombardier Q400Next Gen aircraft. airBaltic has received numerous international awards for excellence, innovative services, and achievements in reshaping its business. In 2012,airBaltic was ranked by Airline trends among the Top 10 airlines globally for innovations. In 2017, the airline received the CAPA Regional Airline of the Year awards, while in 2018 airBaltic received the ATW Airline Industry Achievement Award as the Market Leader of the Year. airBaltic achieved the best on-time performance globally in 2014, 2015, 2016 and 2017.