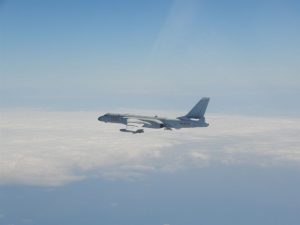 A H-6 bomber of the PLA. Photo courtesy of MND

Taipei, Oct. 4 (CNA) A total of 56 Chinese military aircraft flew into Taiwan’s air defense identification zone (ADIZ) in two separate sorties on Monday, the highest-number in a single day since Taiwan began issuing a tally of such actions in September 2020, according to the Ministry of National Defense (MND).

Another sortie comprising of four J-16 fighters occurred at night, the ministry said.

That airspace is considered part of Taiwan’s ADIZ, an area declared by a country to allow it to identify, locate and control approaching foreign aircraft, but are not considered by international law to be its territorial airspace.

The new high figure in a single day coincided with a Twitter message posted by the commander of the U.K. Carrier Strike Group on Monday, saying a fleet led by the U.K. HMS Queen Elizabeth carrier has passed from the Philippine Sea through the Luzon Strait in preparation for an exercise with the Singapore Navy in the South China Sea.

During Oct. 2-3, the Japan Maritime Self-Defense Force joined the HMS Queen Elizabeth, the USS Carl Vinson, and USS Ronald Reagan to launch an exercise in waters southwest Okinawa along with warships dispatched by the Netherlands, Canada and New Zealand.

Lin Ying-yu (林穎佑), an assistant professor at National Sun Yat-sen University, said he suspected these record numbers of Chinese military aircraft entering Taiwan’s ADIZ are aimed to raising pressure on Taiwan and also showing China’s military muscle to the neighboring countries, as well as the U.S. and U.K.

Premier Su Tseng-chang (蘇貞昌) has criticized the move as bullying by China. It’s unclear why Beijing is sending so many planes to the ADIZ, but the timing coincides with its National Day on Oct. 1 and some analysts have said it could be an attempt to assert its determination to safeguard what it sees as its territorial integrity and goal of eventually unifying with Taiwan.

(By Matt Yu and Frances Huang)